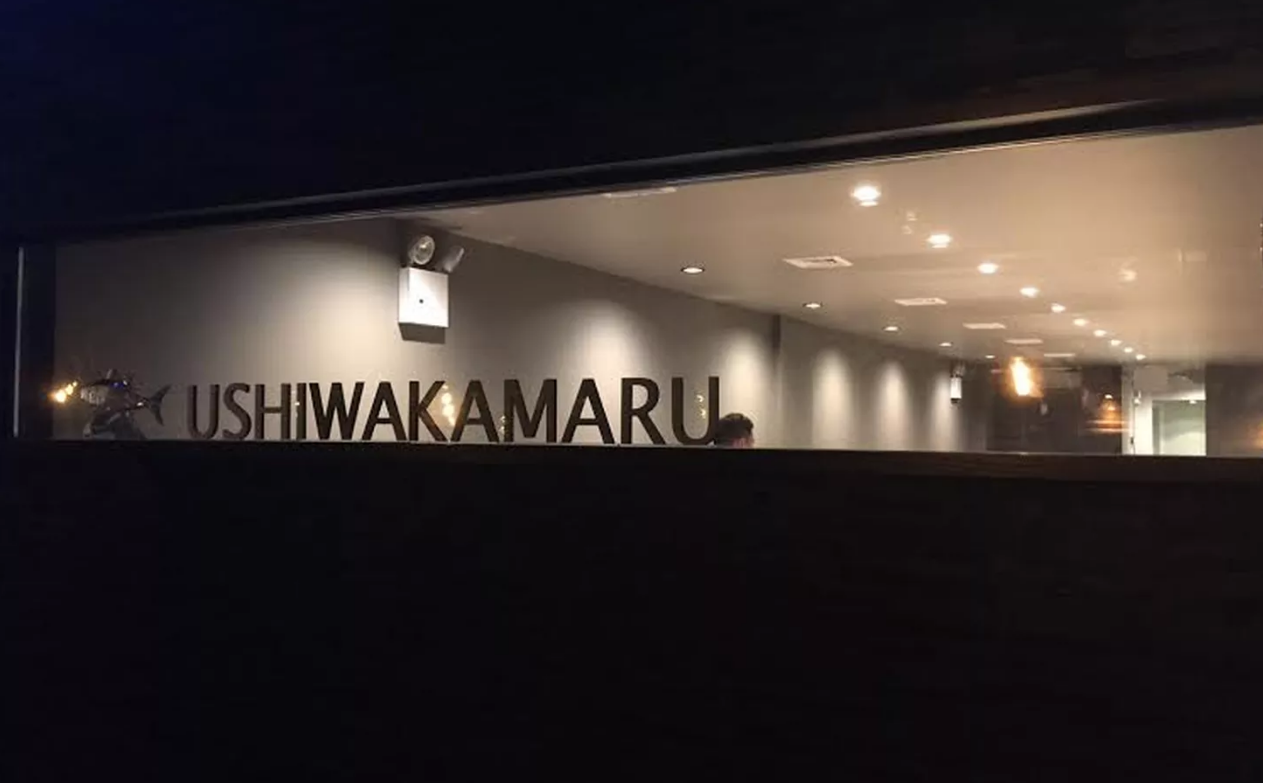 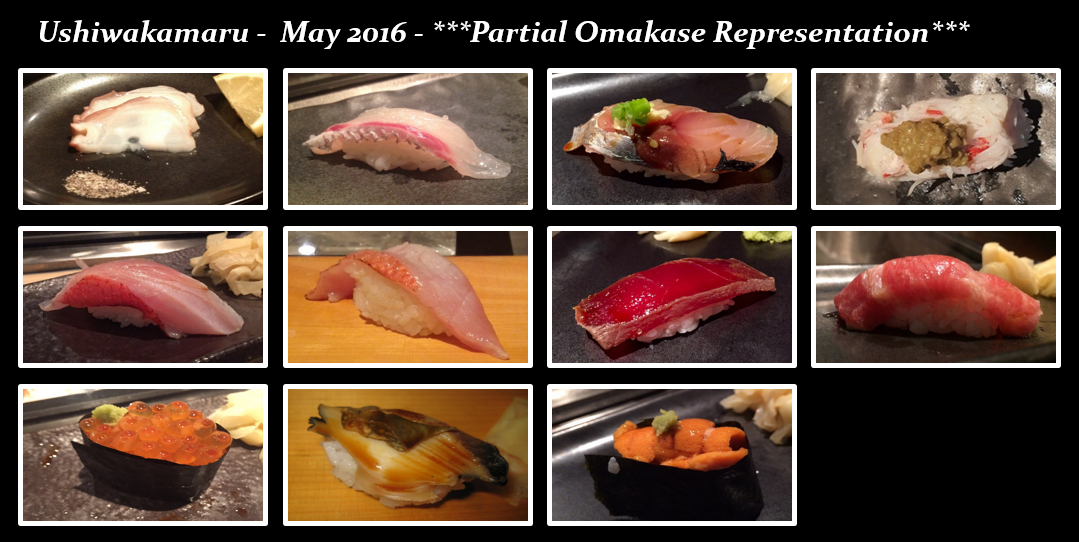 After my decision to start writing this guide, the first restaurant I went to was Ushiwakamaru.  (From here on forth, I’m going to refer to them as Ushi, because Ushiwakamaru is simply too long to type!)  I apologize in advance, but the photos in this first review are not mine, I took them primarily from the Ushi yelp site.  When a chef serves you sushi, you’re SUPPOSED to eat it immediately.  So taking a couple of minute to take a photo is a bit of a sushi faux pas.  Actually taking photos at any fancy restaurant is a bit of a faux pas.  It screams, I don’t belong here!!!  But fear not, I’ll suck it up and photo away in the future!

About a decade ago, I used to frequent this small establishment in the West Village, back when it was still on Houston.  A visit, maybe three years ago, had since closed the doors to Ushi for me.  My man, this gorgeous hot blooded Italian man, had a tiff with the chef.  Major no-no.  Not that we were asked to leave, or to never come back, but if my man ain’t happy, what’s the point?  The quarrel?  Four little quail eggs.  My man loves him some raw quail eggs!  At the end of our delectable omakase meal, along with other sushi pieces, he requested 4 raw quail eggs.  After some time, the chef puts down the plate, and exclaims “FIRST TIME, LAST TIME!”  Clearly, the chef thought being asked for quail eggs alone, was beneath him.  My man almost reached over the counter to ring his neck.

Why I needed to come back?  Their TAKO (octopus).  I don’t know how they make this, and though I love grilled octopus from say, a Mediterranean restaurant, I’m generally not a fan of TAKO as a sushi/sashimi dish.  Ushi has found a way to barely cook it, such where it’s still very much raw on the inside, where upon it entering your mouth, there’s an amazing freshness, a tiny tinge of necessary chewiness, a small crunch, and an all around feeling of satisfaction.  The fancier restaurants, the likes of Kuruma, Yasuda, Brushstroke, don’t really bother with TAKO.  They may have their NAMADAKO, but few tampers with the TAKO, and they definitely will not put it on their omakase.  If Ushi didn’t put it on theirs, I would never have ordered it, so thank goodness they did!  The only comparator I have for Ushi’s TAKO is 15 East.  They have a true NIDAKO though, where they fully poach their TAKO.  Though equally delicious, I would opt for Ushi’s TAKO any day.  Just personal preference, I like raw, or as close to it as I can get.  I kid you not, Ushi’s TAKO is no joke.

We each get to pick an ice cream flavor.  I don’t remember all the options, but we chose one Green Tea, and one Sesame.  I’m not a sweets connoisseur, so this is going to be brief.  The Green Tea tasted like green tea, good enough.  The Sesame, as you would imagine, tasted like sesame, nutty, peanut brittle-ish.  Per the big white man, peanut brittle better, green tea has no taste.

I am VERY happy that we are USHI-ing again, but unfortunately, I have to give them a really misleading rating of 26 out of 35 points.  The food portion was fantastic, almost perfect, even the cost was great, the only real ding was the high mark ups on SAKE, they got 0 out of 5 there! : 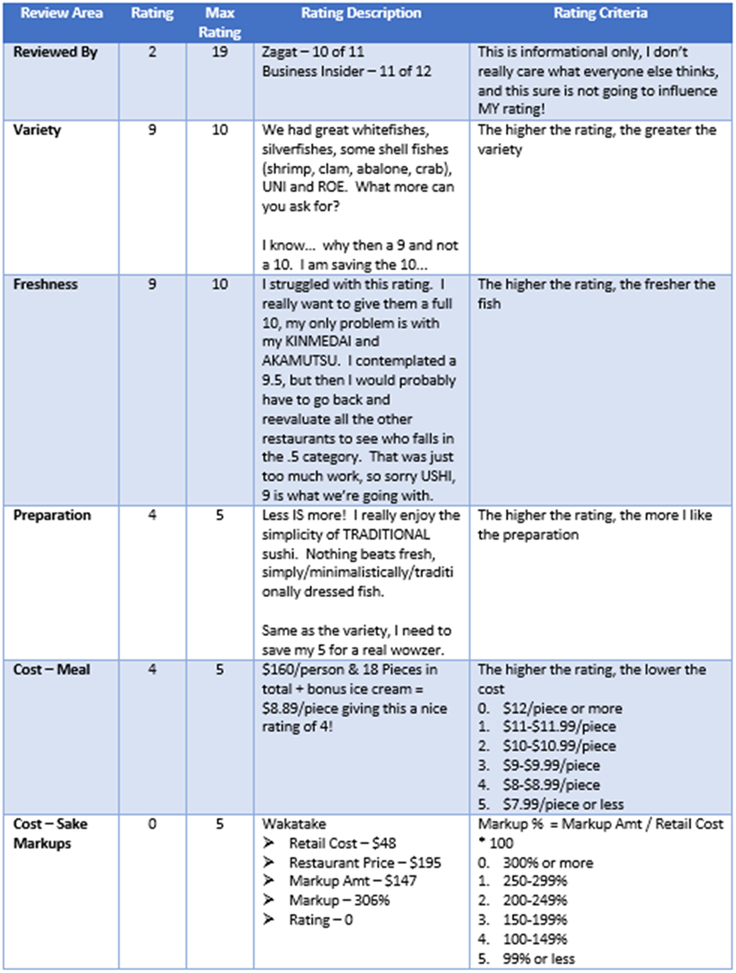