It’s been a few years since I’ve last visited Tanoshi.  I used to always think, maybe one day Tanoshi will open up a second location downtown?  Or maybe they’ll decide that being uptown isn’t all its hyped up to be, so they’ll move?  Both of which I knew were pipe dreams.  The owner, King Ang, specifically opened up at this location because he thought there were a lack of quality sushi-yas uptown.  We’re downtown people though.  Boyfriend refers to midtown as Canada, and uptown the North Pole.  Wait till he hears we are going to Sasabune (just down the block) in a couple of weeks!  Who doesn’t love surprises?

Both from memory, and on paper, with the exception of location, Tanoshi is our dream sushi-ya.  Simple, almost hole-in-the-wall type (décor), BYOB (that means zero alcohol markup), with amazingly fresh fish, prepared minimalistically (Edo-period style), and super attentive service.  These were all specific requests from head chef, Chef Toshio Oguma.  The story of how Chef Toshio Oguma and King Ang paired up is quite interesting, watch the interview!  They situate the restaurant such that there are only 3 seatings a day, 6PM, 7:30PM, and 9PM, and each of their 3 chefs serves only 4 patrons per seating.  Word to the wise, once seated, eat quickly!  The 90 minute window includes the 15 minutes that they need to turn over the restaurant for the next seating.  No joke, they have JUST ENOUGH glasses and plates.  This means you have roughly only 75 minutes!

The omakase consist of 10 pieces, a half roll, and a hand roll, and will take a good 45-50 minutes.  If that’s enough, then you’re all set!  But let’s get real, who does that fill?  That’s like a half meal!  Like a Happy Meal from McDonalds.  I’m not a child, I need adult portions!  For those that eat like a regular person, you may want to do the “double omakase”.  The double omakase is a total of 20 pieces, a half roll, and a hand roll.  Basically everything you would get as part of the regular omakase, plus 10 of the items in the “add-on” list.  You have to let them know in advance if you want to do this though!  We typically like to do the regular omakase, and then order individually.  This is because we are both so picky in what we want.  If they have 15 add-ons for you to choose from, we might want to do multiples of only 5 or 6 items, and not have one of each of the 15.  Problem is TIME.

Last tid bit of advice.  If possible, reserve one of the earlier seatings.  They run out of fish, so as the night progresses, the list of add-on options gets shorter and shorter.

To be completely objective, I should probably comment on the overall experience.  The word of the day is RUSH!  I think I talked about that enough though, so let’s talk abt the other aspects.  If you’re looking to sit down, enjoy, relax, this isn’t the place.  This reminds me of the sushi-yas at the Tsujiki Fish market in Tokyo.  The kind that is open from 5AM to 11AM.  The kind that squeezes you in, seats you in a tiny stool, gives you just a cup of water, and that’s about it.  It sounds negative, which is why I didn’t want to talk about it, but honestly, other than the rush, none of the other “perceived negative” aspects bother me.  We had a total of 15 different kinds of fish, all except for one (the clam), was incredibly fresh, and absolutely delicious.  If they weren’t such a pain to get into, if they were downtown, we could easily become regulars here! 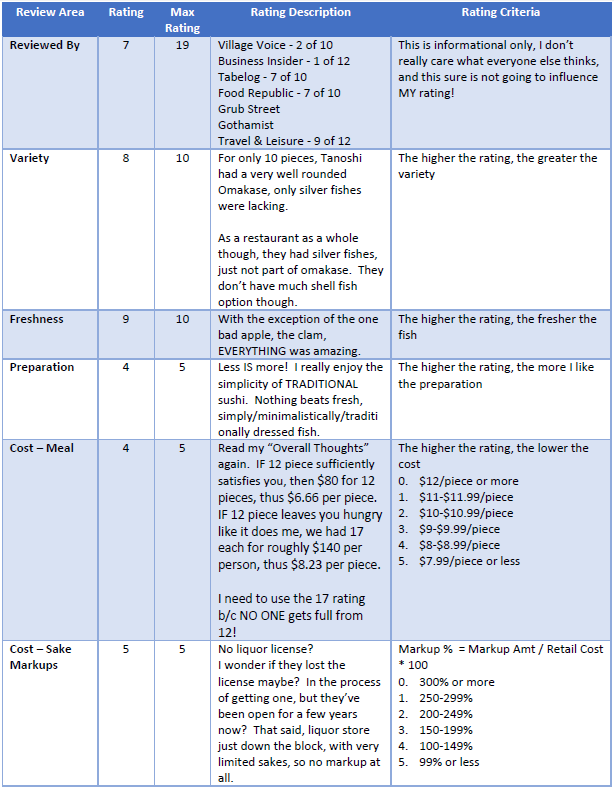