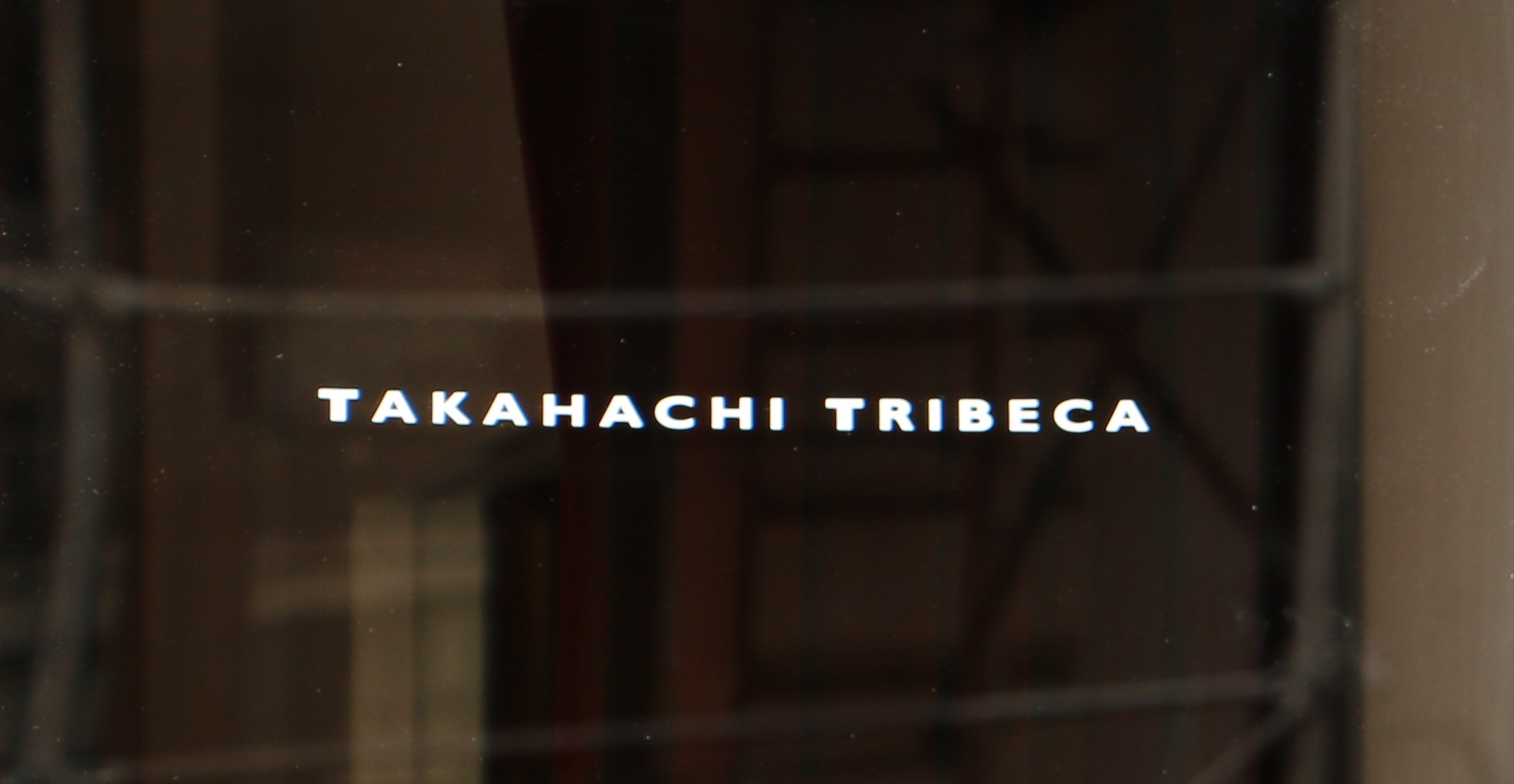 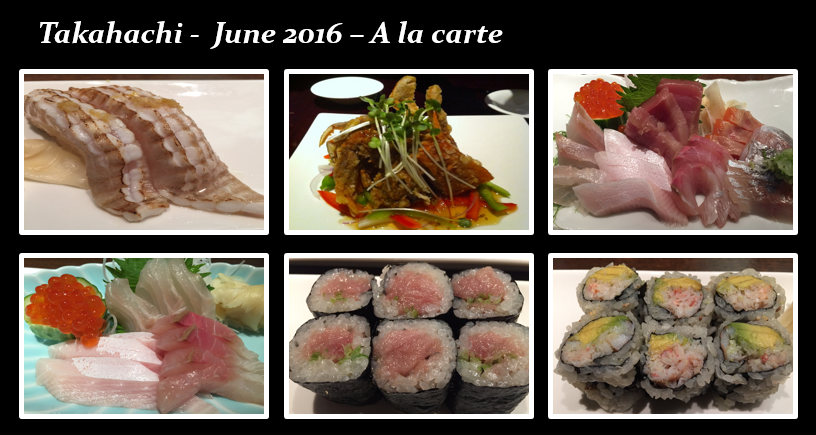 TAKAHACHI is one of the four sushi-yas that we “frequent”. BLUE RIBBON IZAKAYA is the fancy, KANOYAMA, TAKAHACHI (of TRIBECA) and TOMOE are the “every day” sushi-yas. Which of the three that we go to depends on what’s on the menu for that day, or honestly, what is “convenient”. I know… A bit disloyal! It’s ok though, we do still go enough that the staff remembers us, and we still get special treatment!

TAKAHCHI and KANOYAMA both updates their website with specials every day around 3ish. TAKAHACHI is not fantastic at this though, but trust me, when I get the menu, and realize they haven’t updated their site, they do hear it from me! TAKAHACHI does not offer omakase, so don’t go in expecting it. They have a slim menu, of very fresh fish, and a larger menu of rolls and cooked goods.

Our most recent meal consisted of these guys:

1. ENGAWA ABURI-ed – They occasionally put this on the menu as an appetizer special, but really, you can order it any time, as ENGAWA is part of their everyday menu, not just on the specials. They serve it with ABURIed, and topped with a little bit of YUZU salt. It’s very yummy.

2. Soft Shell Crab – Believe it or not, TAKAHACHI makes a super DUPER soft shell crab. Of the three every-day sushi yas that we frequent, they do it the best, BY FAR. I prefer it without the sauce, and always order it with the sauce on the side. Clearly, I forgot this time. No worries, boyfriend loves the sauce, so he enjoyed it all to himself! 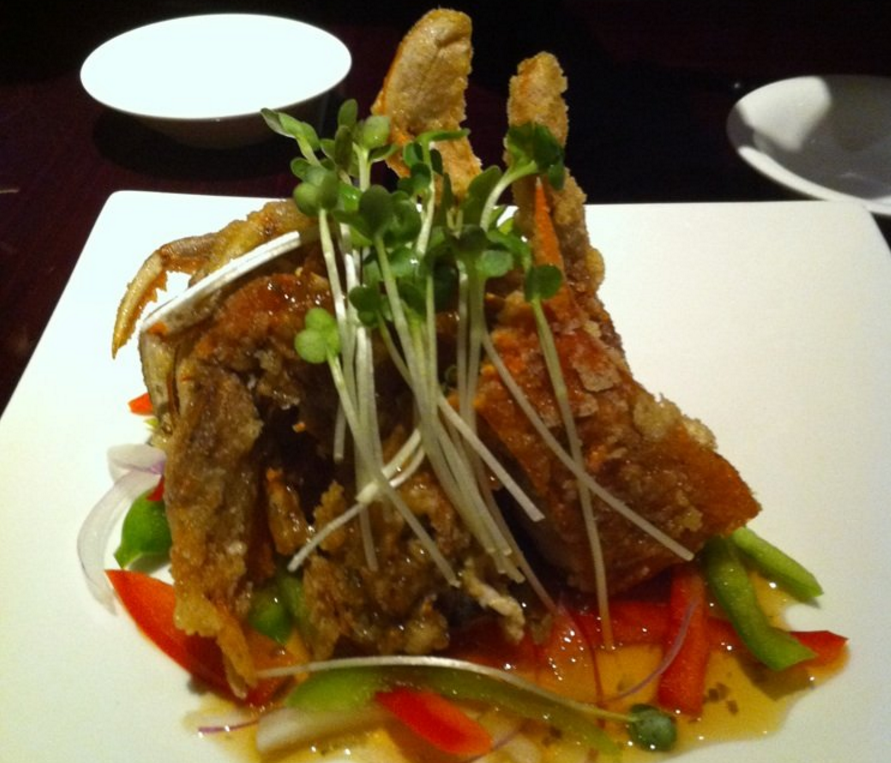 3. Sashimi Plate #1 – I always order one of every fish I like to see what is good, and worth a second round. Clockwise starting from top left:

3.2. CHUTORO – TAKAHACHI’s CHUTORO is pretty hit or miss, it can be fantastic, or just OK. Never bad though, so always worth a try. Today, it was just OK.

3.3. Sockeye Salmon from Alaska – I’m not a fan of this wild salmon, boyfriend is though. I prefer the farm. HA!!!

3.4. AJI – Never “great”, but consistently good, but never served with enough grated ginger. Just ask though, they are happy to give you more than you need!

3.6. HAMACHI-SUNAZURI – This is a Yellowtail belly, that for some reason TAKAHACHI calls HIRASU. I don’t know why, but I don’t fight it. They almost always shave this in stock, and it’s ALWAYS good!

3.7. MADAI – Same as AJI and KANPACHI, never great, but consistently good. Problem with MADAI is that I most prefer it served as sushi, with a little skin still on. Another anomaly abt TAKAHACHI is that they never serve MADAI with the skin on. Why is that? 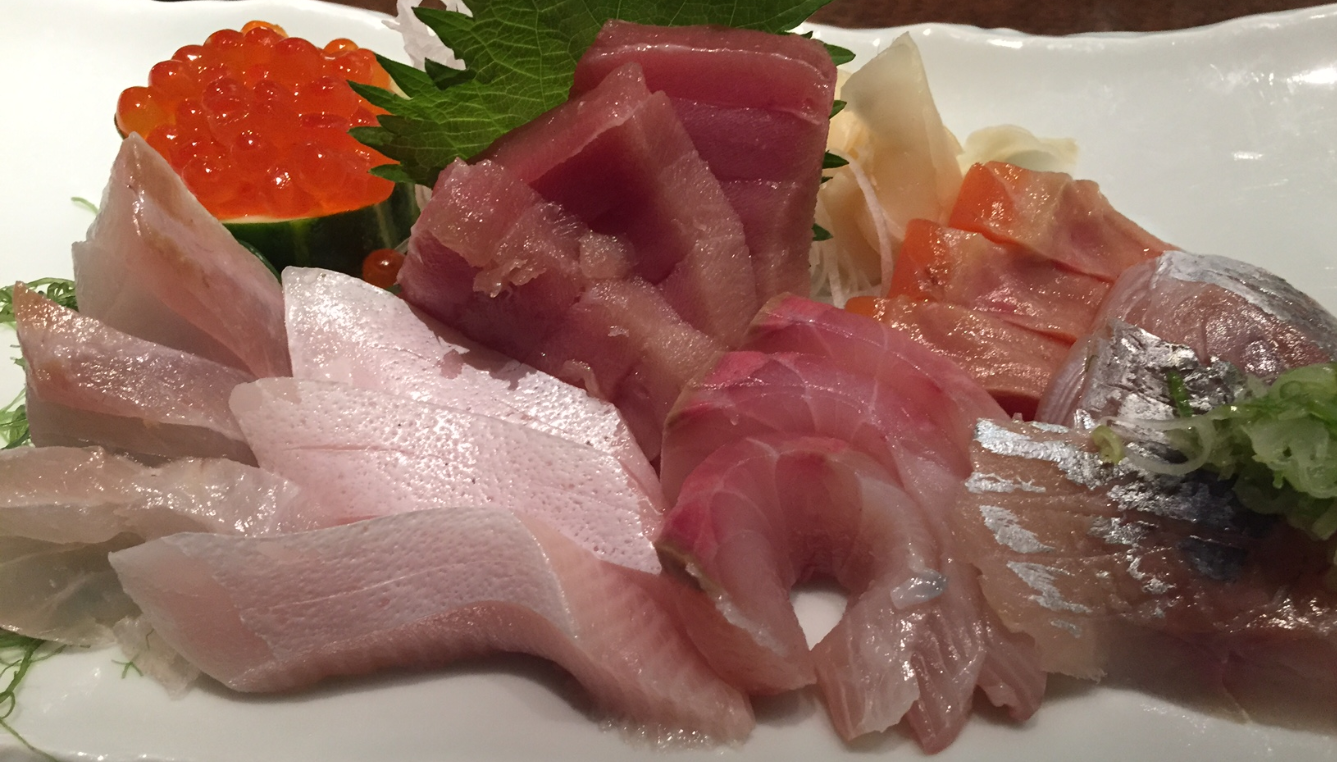 4. Sashimi Plate #2 – Clearly, I enjoyed the IKURA, MADAI, KANPACHI, and HAMACHI-SUNAZURI the most, thus a repeat. 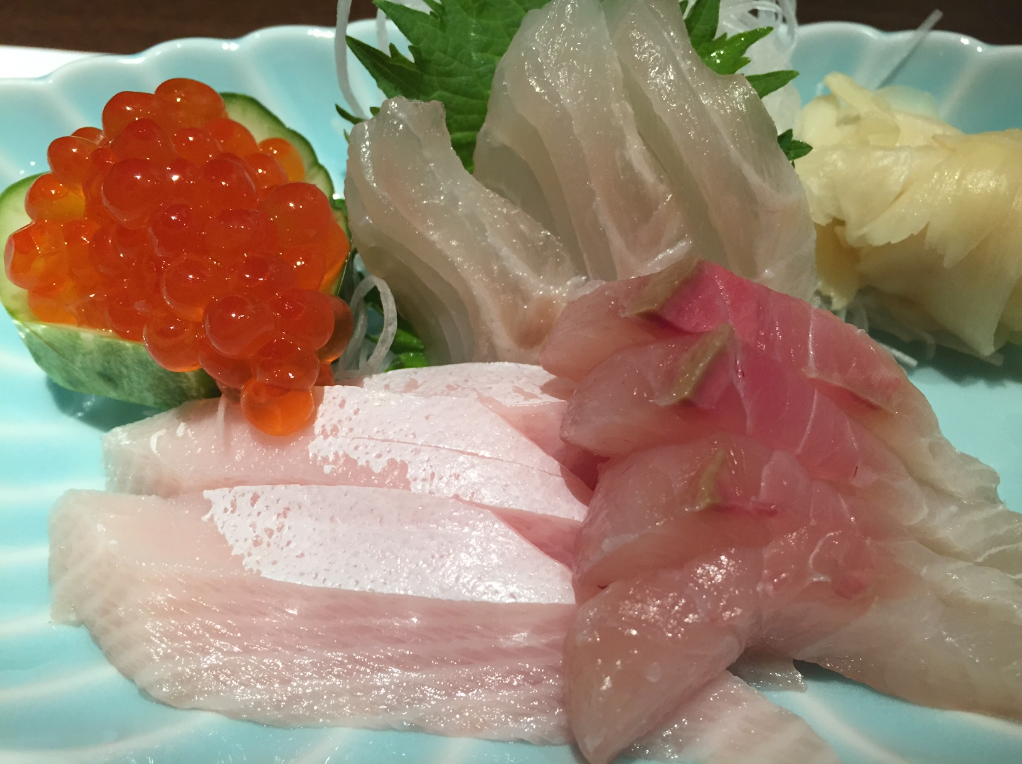 5. NEGITORO roll – This was on the special appetizers list today, which again is a bit of a non-truth, they almost ALWAYS have some sort of TORO on the menu, so even when NEGITORO is not on the menu, you can still order it! I like my TORO roll with TAKUAN (a yellow pickled radish), the sweetness and tang in the radish really cuts the fat in the TORO. Quite delish! I was in an exceptionally easy going mood today, so I ordered it as is. Yes, I ordered, not we. When it comes to food, boyfriend allows me to do ALL the ordering, isn’t he great? 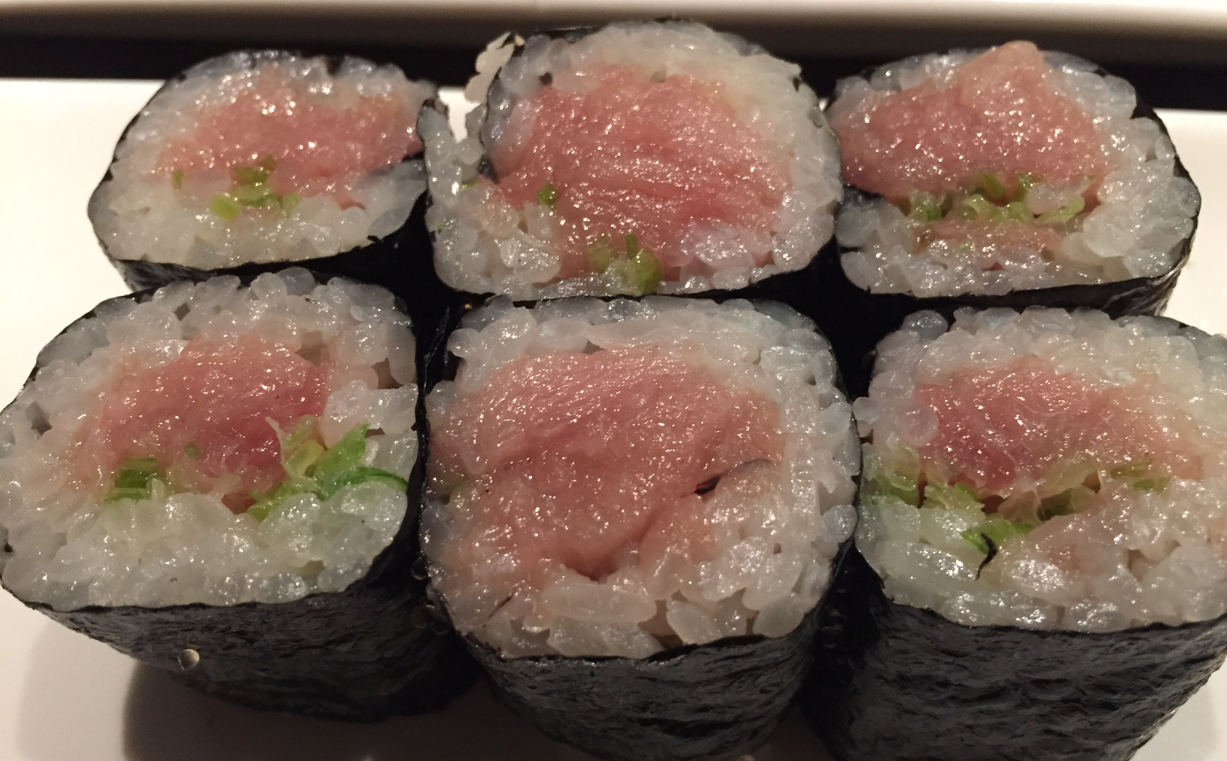 6. California roll – Is this the strangest thing to read? Yes, I do like a good California roll. If the California roll is made with real crab, and not that imitation crap, it’s quite yummy. Heck! SASABUNE built an entire EMPIRE on their blue crab roll! How crazy is that? And I LOVE EVERY BITE! Back to TAKAHACHI’s California roll. I’m fairly specific with my California roll, and our usual waiters remember my specifics. Today we got a newbie waiter, AND I forgot to specify, so we didn’t get it the way I prefer. I blame no one but myself. California rolls are best with as little rice as possible, even amounts of crab, avocado and cucumber, and the NORI (seaweed) on the outside. One problem with TAKAHACHI, for some reason, their NORI on their rolls is NEVER crunchy. That’s pretty irritating, but I’ll give them a pass given that this is an every-day sushi-ya. Usually, I’ll just ask for extra NORI on the side, peel off a little piece, and re-roll each cut myself. As the boyfriend says, I’m a real “Pain in the A*s” when it comes to food. Actually, that’s not true. He says I’m a real “Pain in the A*s” all the time. We’re such a loving couple, aren’t we? 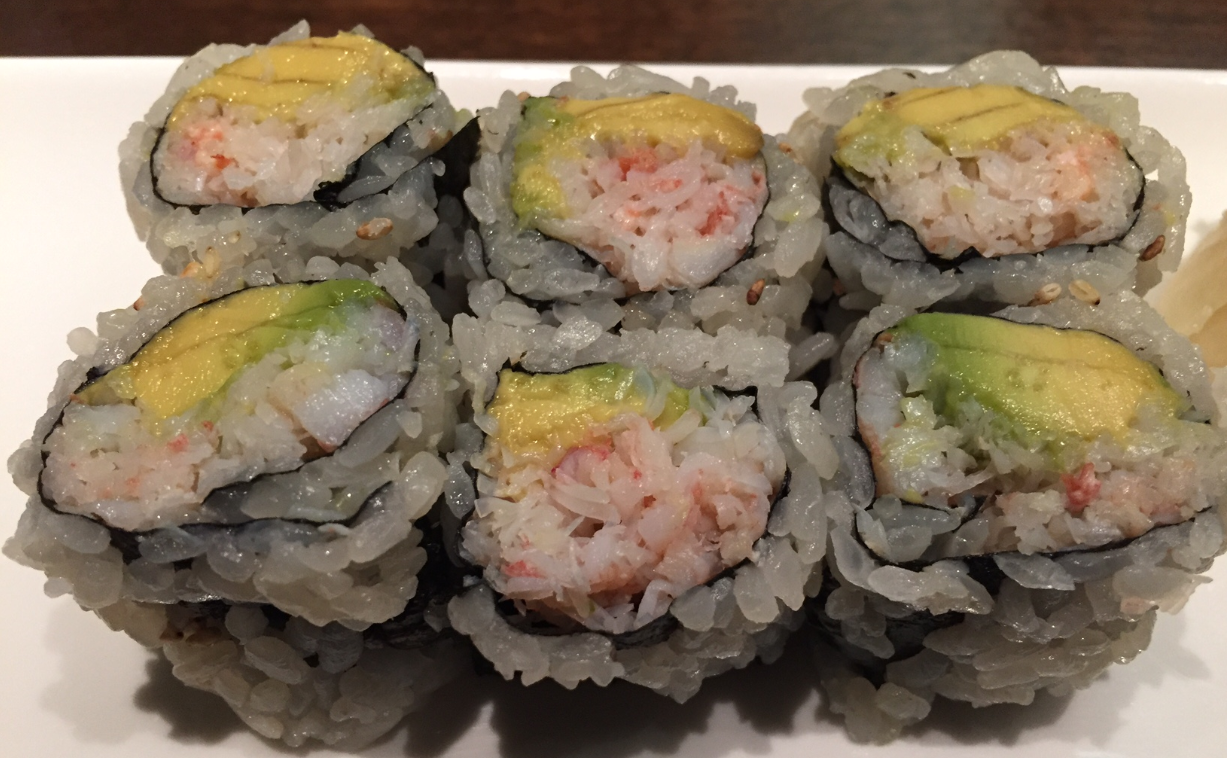 Note that I did not order UNI or HOTATE today. It wasn’t by choice. TAKAHACHI always have delish HOTATE, but they run out quick. One thing you have to know abt TAKAHACHI is that they don’t seem to stock TOO much fish. We try to go at 6 or 6:30, because by 7, they are almost guaranteed to start running out of the super fresh stuff, the specials, and HOTATE and UNI, etc, etc. When in season, they have UNI from California. Usually, very good. Today’s UNI is from Maine, which I’m very vocally, not a fan of. In attempt to change my mind, they gave me a small dish to try. Mind not changed!

Some other dishes we love but weren’t on the menu today:

1. Oysters – When available, each order is between 3 to 5 oysters (pending on size), served on a small platter with PONZU jelly, MOMIJI OROSHI (Grated Daikon Radish marinated with red chili peppers), and thinly sliced scallions. It’s pretty darn good. I really enjoy the PONZU jelly. Sorry, tried, but I couldn’t find a representative picture…

2. AMAEBI – When in season, they offer a very generous portion of AMAEBI. Usually very well cleaned. Same, sorry, no pic.

3. KAISENDON MINI – I don’t order this anymore, so I pulled this photo from google, but it’s what I remember TAKAHACHI’s KAISENDON MINI to be (except this photo has no UNI). I stopped ordering this a while back, when as I got more and more specific of what fish I do and don’t like. But it’s really an awesome bowl/value. 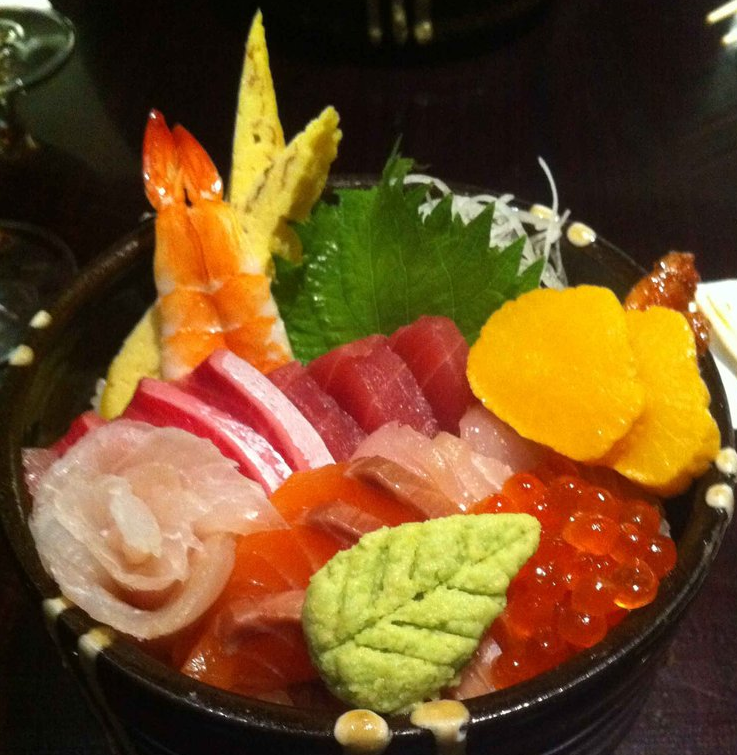 Overall Thoughts:
TAKAHACHI of Tribeca will continue to be one of our fave every-day sushi-yas. For the value, it gets a very respectable 25. 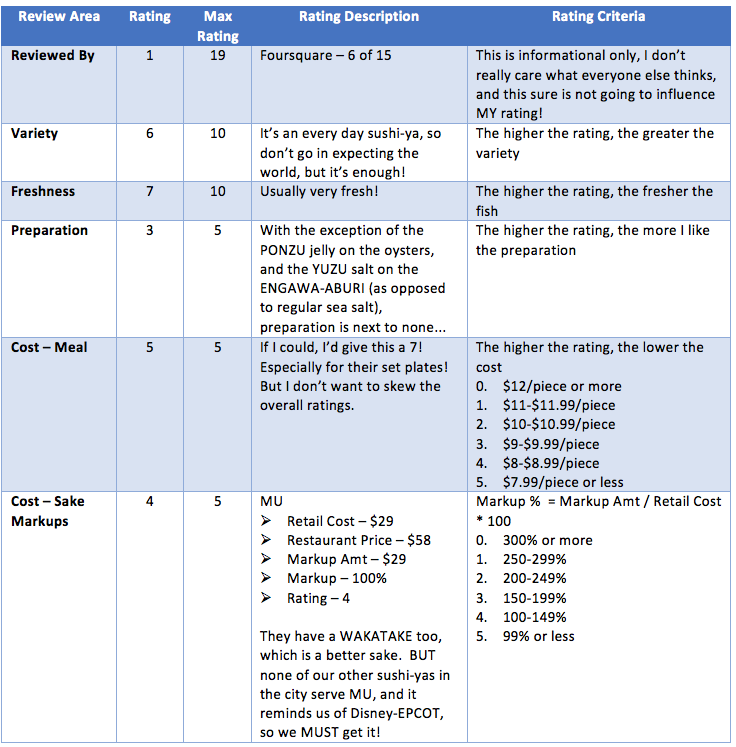