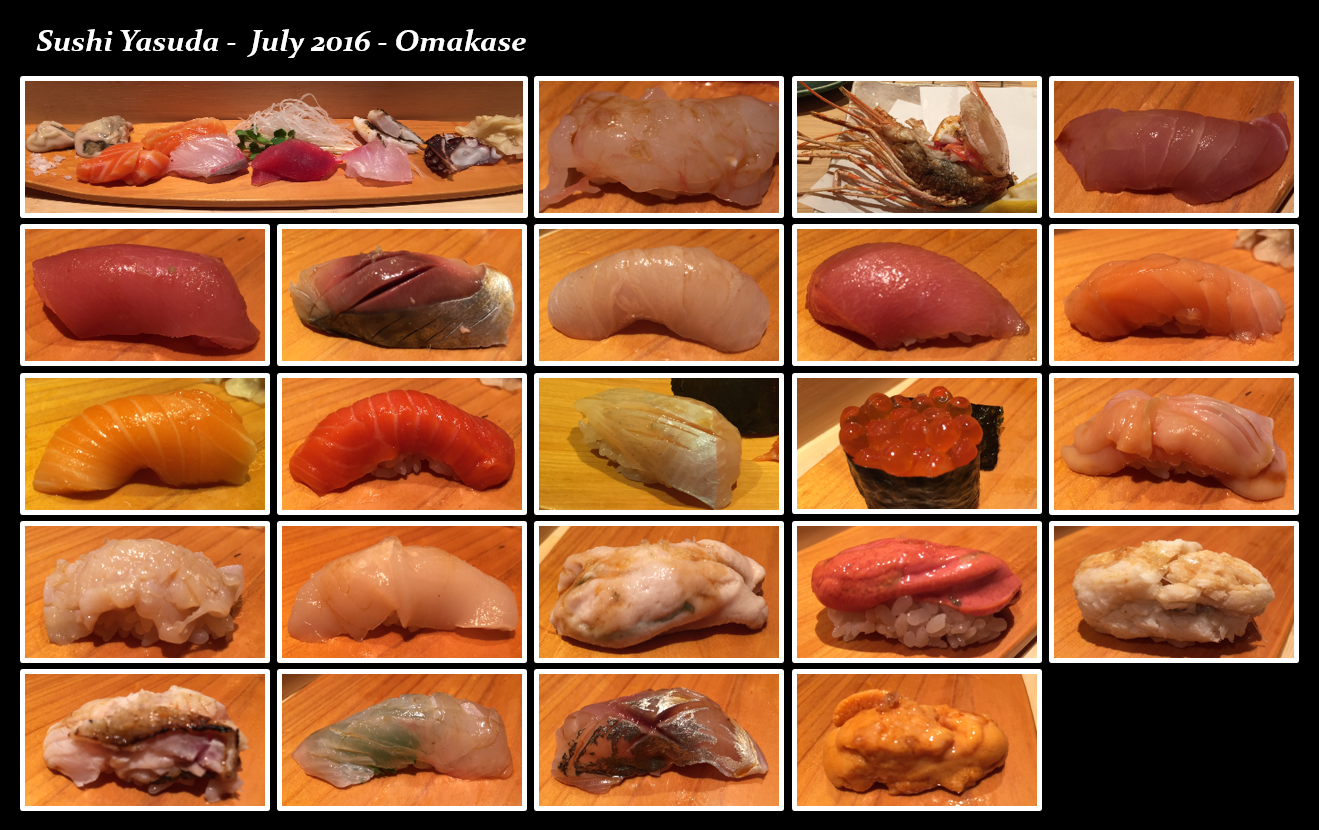 Wow Sushi Yasuda… This place really takes me back.  I’ve had countless lunches and dinners at this popular sushi-ya back in the day, but never a “proper” one.  This is probably why I never gave it its deserved appreciation.

My first job out of college landed me a block and half, two blocks away from Sushi Yasuda. Those were the days I was going down Zagat Top 50’s list, one at a time, restaurant, by restaurant, starting in midtown.  That was when I first tried the likes of Kuruma Zushi, Hatsuhana, Sushi of Gari,  La Bernadin, La Genouille, Daniel, Jean George, oh my, I’m getting hungry!  Those were also the days where I had a crazy appetite, an eye for designer goods, and crap for pay.  I was fresh out of college then!

Luckily, fresh out of college also meant I didn’t know how to order the fancy stuff, the omakase, or the sakes.  The house sake, or the cheapest sake that they had was fine for me.  It also didn’t take me and my dining partner, a minimum of two bottles to get through dinner.  For those reasons, and it being practically next door, Sushi Yasuda just “made sense”.  Get off work from my entry level job, in my semi-brand name garb, grab a friend or a coworker, order the very affordable set sushi or sashimi plate, the cheapest sake they had, then slum it on the train ride home for the next hour, half tipsy.  That was back then.

Today, Midtown and north thereof, equals men in suits, women in head to toe luxury labels, and everyone’s noses up in the air, higher than their eyeballs.  With its unfortunate location, its big, bright, airy feel, tons of “suits” in and out, and the fact that the chef serving you, is putting together 50 catering orders at the same time, Sushi Yasuda is the epitome of a sushi-ya I would not care to visit, much less frequent.  So how did this fancy sushi-ya in Grand Central re-win me over when I’ve changed so much?  They excel in what matters, all the areas/categories that I rate, insane variety, ridiculously fresh fish, simple and perfectly executed preparation, and affordable pricing!  For all that, I’ll shelp myself to what my boo calls “Canada”, Midtown East.  I’ll accept the bright lighting, the big, airy, cold, sterile space, I’ll deal.  By the way, I’ve never actually referred to my man as “my boo”, I just saw it on TV, and thought it was funny.  TV…  Enriching lives everywhere!

So let’s get down to business.  Let’s talk about the omakase at Sushi Yasuda.  There are two very important things to remember when ordering the omakase at Sushi Yasuda.  First, it’s not “set”, you don’t choose from a $100, $150, $200 version.  You simply let the chef know sushi only, or sushi and sashimi, starting with sashimi.  The chef will continue filling your plate until you say stop.  Kind of like the red and green signals at a Brazilian Churrascuria!  Second, and for me, more importantly, is that it’s a bit harder to piss off your chef here, than the smaller chef-owned restaurants.  You can make ridiculous requests and not worry about making him mad.  You can even double dip your sushi in soy!  I attribute their mild/well behaved mannerisms to their primary clientele, suits that don’t know one fish from the next, that have crazy preferences, but won’t take no for an answer.  Thank goodness for the suits!  The chefs at this top notch sushi-ya has been conditioned to handling the “difficult customer”!

Complimentary Asparagus – Several 2 inch cuts of boiled Asparagus, that tasted smoked, topped with a little bit of sesame seeds.  This was not a dish for me, I’m a huge fan of Asparagus, but need my greens crispy/crunchy, barely seared, so this was severely overcooked.  It’s almost not worth discussing, but it made me realize, when I go for Omakase, I get very little, if any greens at all.  I’ve always thought a Sushi dinners are so healthy, but is it really?  How can a meal with all protein and carb be healthy?  Well compared to my POPEYES dinners, this is VERY healthy. 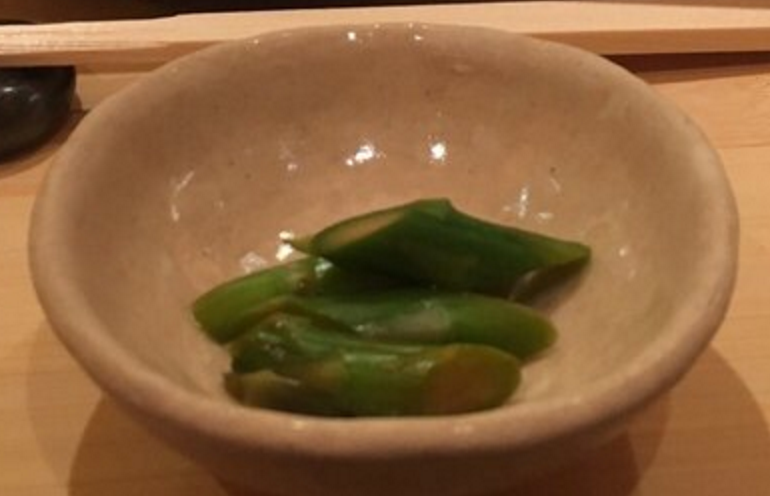 Sashimi (Fishes described from left to right.  How impressive does this dish look?)

All that said, I don’t want to take the spotlight away from Sushi Yasuda.  This was easily the best oyster I’ve had in the last 6-8 months.  EASILY.

On paper, Sushi Yasuda is everything I dislike about a sushi-ya, midtown east, stuffy men and women in their suits, and a cold and sterile environment, yet they have won me over!  And I cannot wait to go back!  They had so many kinds of fish, that I didn’t even get to try every one.  The fish was all outrageously fresh, and preparation/execution was impeccable.  Our bill did not reflect it, because we both eat as though we are each eating for two, but if you look at my cost breakdown, and you eat like a normal human being, it is a very affordable meal. 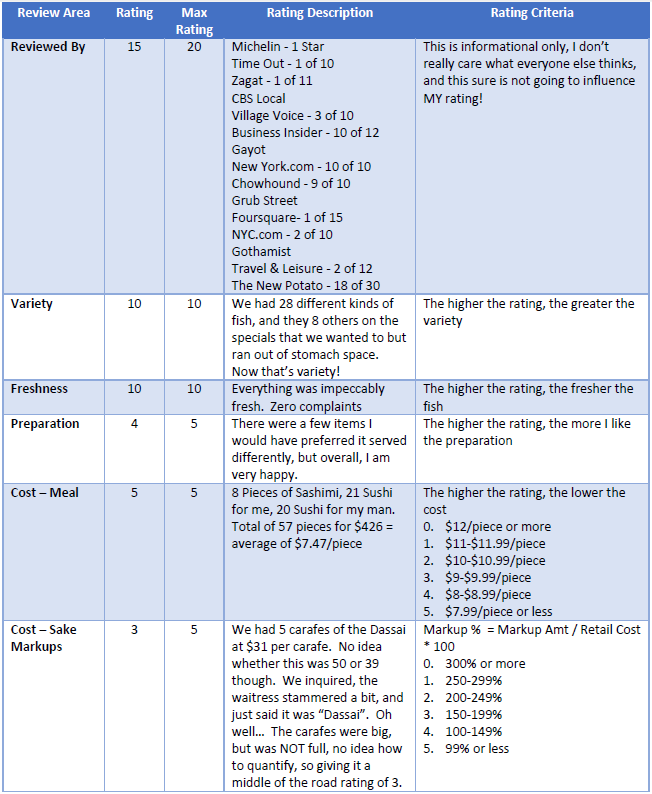