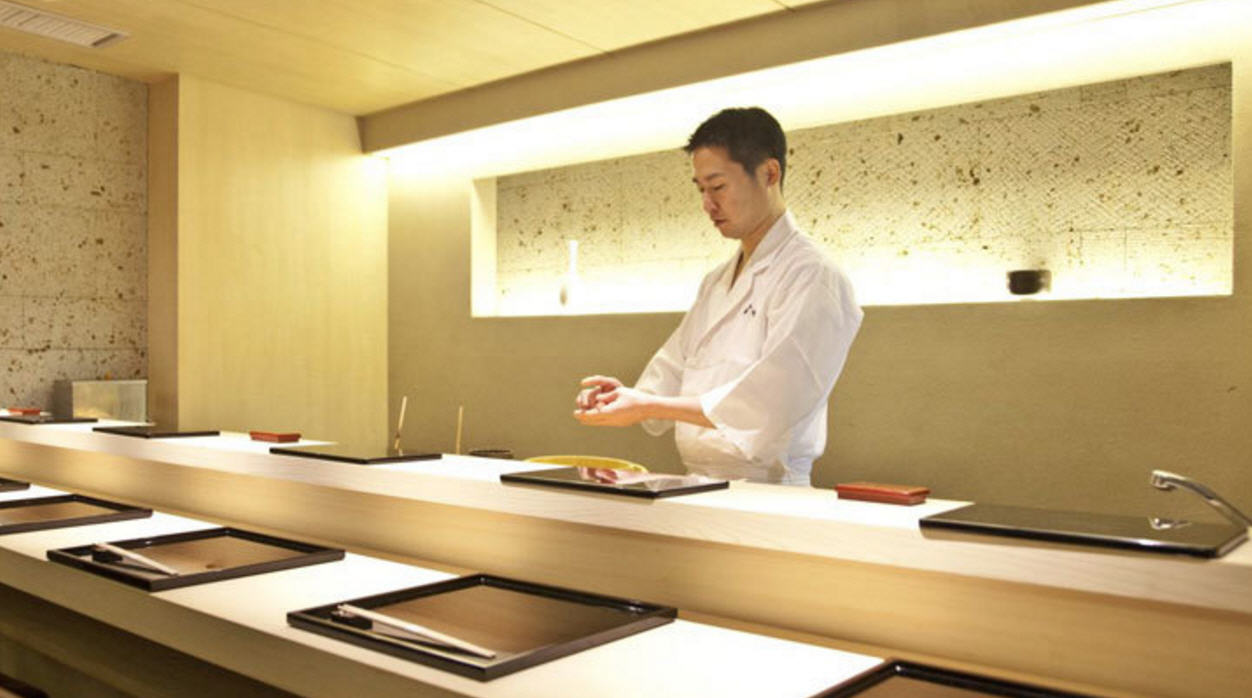 To be brutally honest, Sushi Masuda wasn’t my first choice, it’s wasn’t even my second, or third choice.  But BOY WAS I HAPPY I WENT!

If you read my Takase post, you’ll know how much of a nuisance getting a reservation at a fancy sushi-ya is.  The good but cheaper ones, definition, the ones at the Tsujiki market, are all a few hours wait, and then the good but fancy ones, you can’t ever get a reservation for.  I started calling for reservations over three months in advance.  The host/hostess answering the calls do not understand English, and won’t even pretend to try.  The hotel tells you that those particular restaurants do not accept reservations from hotels.  You have a Japanese speaking friend call, and they see through you, that you are not a local, and thus denied.  Your only real options?  Chance it with a lunch or odd hour walk in, or go through a reservation service like Viator.  This means anywhere from $45-$60 per reservation, per person.  So if you are booking for a party of two, expect to pay nothing less than $90 per reservation.  This is U.S. dollar by the way.  And no, this cost does not come off your bill, it’s purely the fee for making the reservation.  They don’t offer the service for every restaurant, so immediately, your list will be knocked down to half.  Of the ones they do offer, they give you a calendar, but it is nowhere near accurate.  I made three reservations based on those calendars, but after countless exchanges, and finding out that those dates are not actually available, I landed at only one.  And they WANT to make the reservation.  They don’t get paid unless they successfully made a reservation.  Pitiful, huh?

We had a 12:30 lunch reservation on a Tuesday, figured we would have lunch, then head over to the Sumo Tournament.  Which if you are interested in attending, trust me, try to book the MINUTE they open for ticket sales.  I made the mistake of waiting till 9AM the next morning, 11 hours post opening, and got stuck in what would be considered our middle mezzanine.  Anyway, we arrived at 12:45, drove me NUTS because I hate being late.  Restaurant was the bottom floor, inside an unmarked building.  With no clue of where to go, we started down the staircase, and quickly discovered that it’s more of a service entry with stacks of cardboard boxes, so retreated to the main floor on foot.  We took what we thought was the next logical step, get into the elevator, and start from top down, the 8th floor.  By the time we got to the 4th floor, the nice lady finally told us, Sushi Masuda is on the first floor.  A sign inside the elevator would help!!!  There was none, English OR Japanese.  It was just nameless.  Service spiral staircase plus our nameless elevator tour made us an extra 8 minutes late.  How irritating!

All that said, let’s get back to Sushi Masuda.  Chef Masuda is one of Jiro Ono’s disciples (from the documentary Jiro Dreams of Sushi).  Sushi Masuda was granted 2 Michelin Stars for 2017.  A SUPER friendly, super talkative chef that very much enjoys chatting up his patrons.  He speaks decent English, and surprisingly, knows all the popular chefs in New York.  To think of it, our chef from Hong Kong’s Sushi Ta-ke also knew them.  Fascinating how they keep up with that.  His sushi bar only seats six, but he has a private room in the back that seats up to 6 more.  As usual, you get personal attention from head chef, Chef Masuda if you sit at hi sushi bar, but in the private room, you will get your servings prepared by the sous chef.  Clearly, I recommend sitting with Chef Masuda!

Overall though, five cooked dishes is A LOT.  I would have opted for just three, SHIRAKO, grilled ME-HI-CA-LEE, and Simmered AMADAI, and then more sushi.  Also wished they had more variety for raw fish.  I don’t think the Japanese eat as much as we do, when we asked for additions, they looked at us like we were aliens.  We had the ENGAWA, but that was their only other fish.  They offered us rolls or repeats, so we had another IWASHI, and another KURUMA EBI, and called it a day.  Nonetheless, of the fish they had, almost every one of the fish was magnificent.  It was a fantastic time, with fantastic meal.