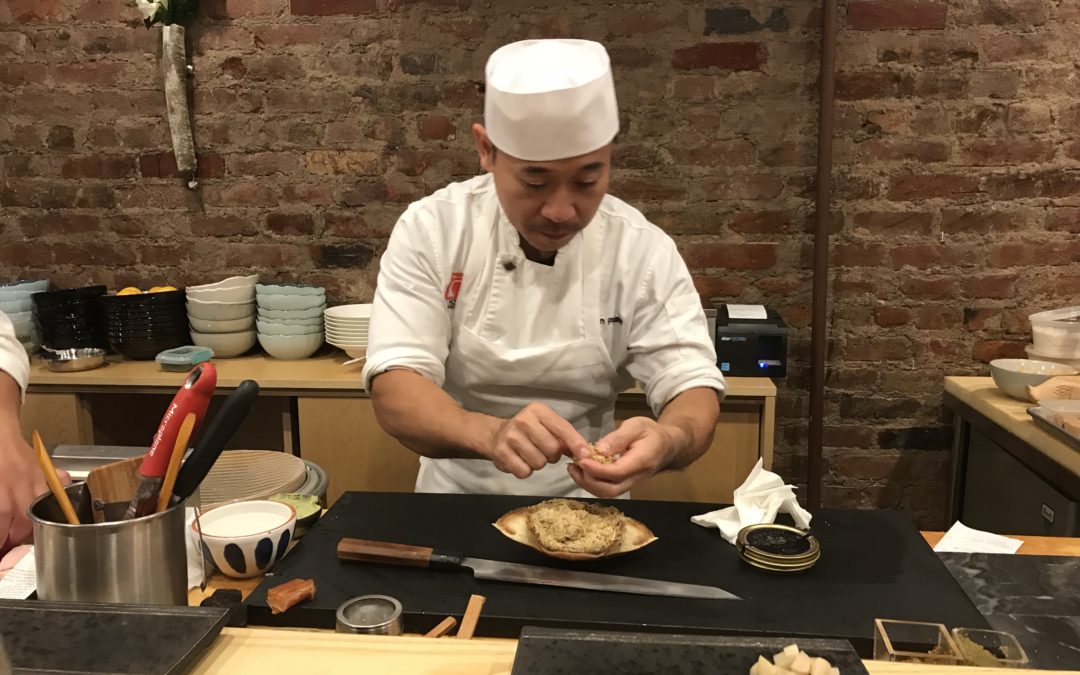 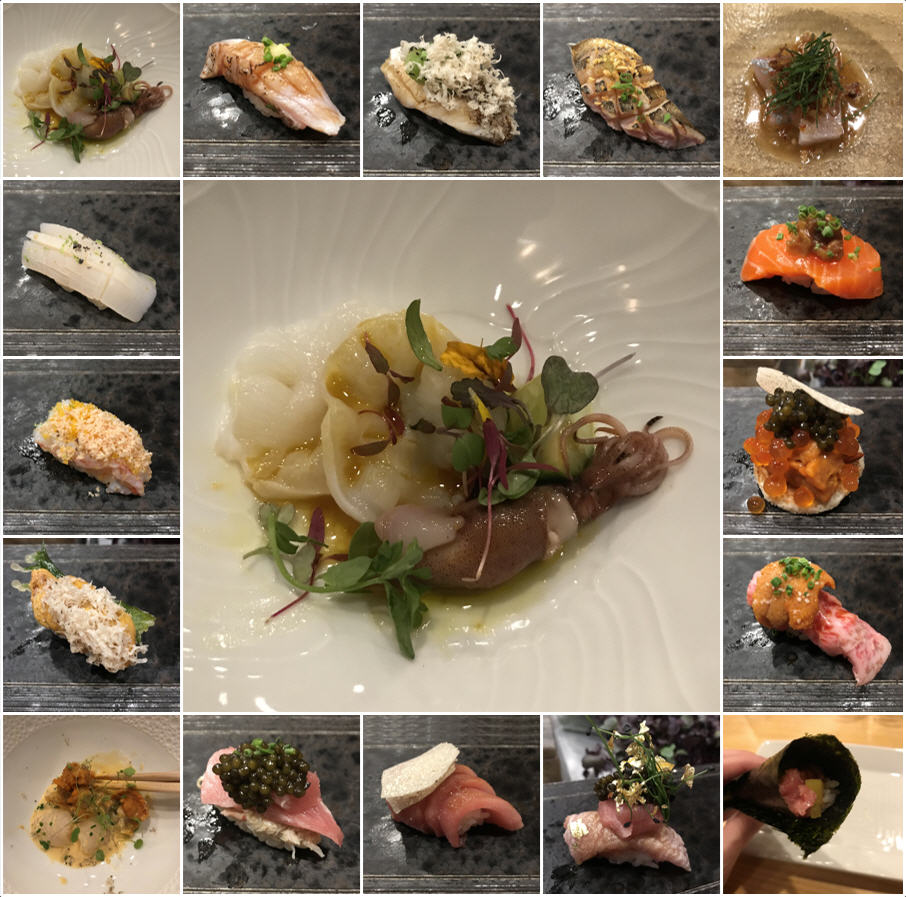 We’ve been a bit leery in trying out new sushi-yas lately, just been disappointed way too many times.  And I know I said I will refrain from writing additional posts unless there is a change, BUT since we have a new rating/scoring system for a few categories, and given the recent super low rating of Gajin (23 out of 35), figured we should see how differently Ishikawa rates.  Turns out, unaffected!

Sushi Ishikawa maintained their highly respectable score of 29 out of 35.  No Changes at all to Variety, Freshness, and Cost.  Preparation, Chef Dom went up from a 4 to a 5.  Sake Markup, down from a 2 to a 1.  Bottom line, other than Sushi Ishikawa’s ridiculously high Sake Markups, Ishikawa really kills every category (Variety, Freshness, Preparation, and Cost)!  I won’t bore you with all the general thoughts of Sushi Ishikawa, I wrote way too much from our last visit, that this would just be repetitive.  But I do have a couple of tidbits to share….

How to Address Chef Dom Pham:  We spent our entire last meal addressing chef as “Pham-san”, but today, we overheard some regulars address him as Chef Dom.  Tonight, we decided to just blend in, and address him the same way his current other patrons do.  Rest assured, chef Dom Pham has confirmed he’s good with either,  that he’s really pretty relaxed with that sort of thing.

Location, Location, Location:  We joke a little bit about how it’s been about 6 months since our visit, Chef thought he didn’t wow us.  On the contrary!  We were wowed!  Very much so!  But we’re lazy.  There are so many good and WALKABLE options in our hood (Greenwich village), that it’s really hard to venture all the way to the Upper East.  Fortunate news for Upper Westsiders, Chef Dom shared that he’s exploring his second location there.  Unfortunate news for us, Chef Dom shared he cannot consider downtown.  Logistically, it would not be possible to maintain quality and supervision at both.  What a bummer!!!

Funny Story:  Do you ever meet someone when you’re just a little too tipsy?  Have full conversations, and then realize – ooh, you were a bit obnoxious?  WELL….  That was me tonight.  We met one of the investors of The Infatuation.  A young man accompanied by a friend/coach.  She was a riot!  I’m kicking myself for having lost her card, she had the best card, and she was a lot of fun to chat with.  That said, the “remove foot from mouth” moments come from the conversations with the Infatuation Investor.  Chef Dom ENGAGED US in a conversation about the “low rating” The Infatuation gave Ishikawa.  The investor argued it was that one reviewer’s opinion, and not his, that he disagreed with that opinion.  Hindsight, I should have voiced my extreme satisfaction with Chef Dom, and left it at that.  But of course, that’s not how it went down.  I decided to share all my thoughts of how 9 out of 10 reviewers don’t know what it is that they are doing when it comes to sushi reviews.  That they have mysterious ratings where no one knows how it’s determined.  That if you ask them what their favorite sushi is, they’d probably tell you it’s the spicy tuna roll.  Why did I do that?  What was I trying to accomplish?  Did I expect him to be like, you’re right, we have zero basis?  I was out of line.  I was obnoxious.  Whether or not I thought it, it need not be said.  For having said it, for poo-pooing the mood, I apologize!  Hope we can be friends!

OK – off to our dinner tonight… 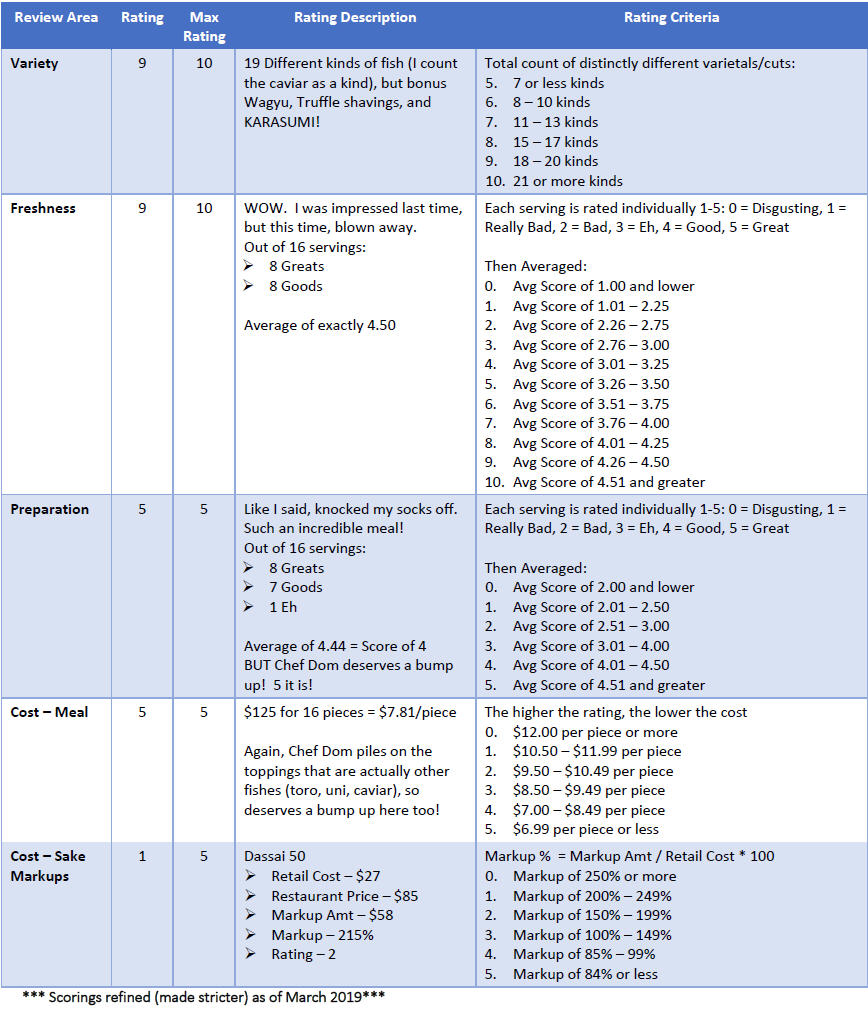