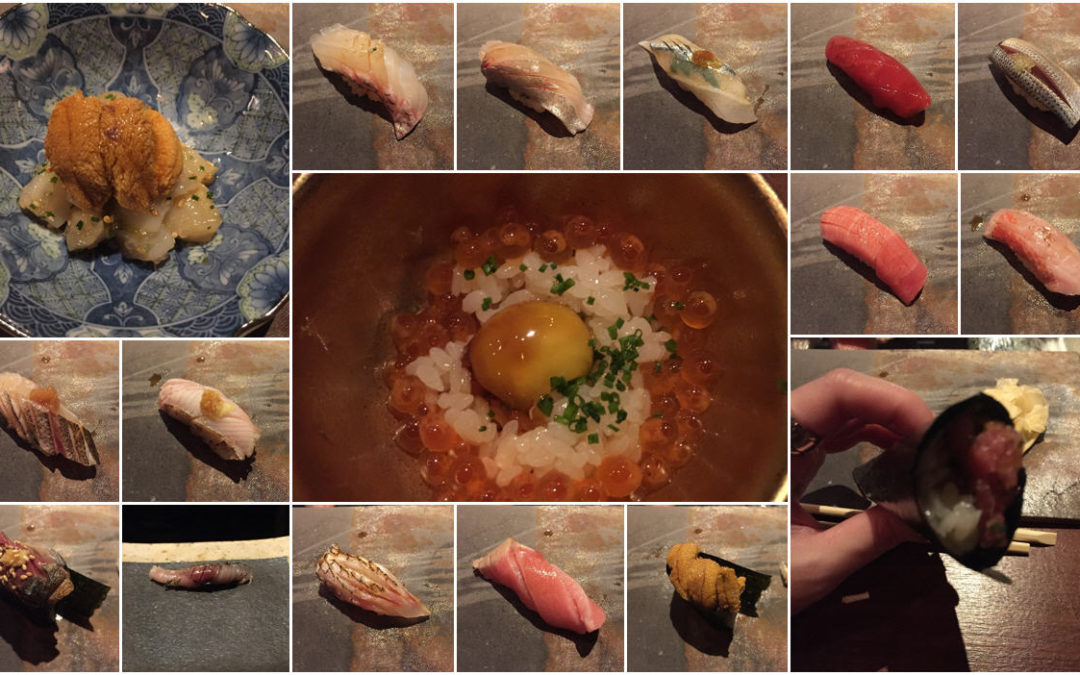 We were so excited to have my girlfriend, whom I refer to as “Kitty Kat” join us for dinner at Sushi By Bae tonight.  We really talked her up (quality vs value), but I have to say, based on tonight’s meal I have to take back some of that praise…

In just 4 short months since our last visit, it seems “Bae’s” (chef Oona Tempest) demeanor changed quite a bit.  She’s got much more of the “chef air”, or at least, her master, Chef Toshio’s air.  Take a read of my TANOSHI post, Toshio-san’s a bit “uppity”.  It could have just been a bad day, but she was not nearly as friendly, as willing to discuss sushi knowledge as she last were.  It started with Bae just being distracted, unengaged.  Asked her a few questions here and there, she responded, but was brief, illusive.  As the night went on, it got worse.  Bae blatantly snubbed my Kitty Kat’s questions a few times.  Kitty Kat wasn’t even asking in depth questions, just what she was being served, as she was sitting a little further, and couldn’t hear.  Then Bae’s friend showed up, and it was as if we weren’t there, complete neglect.

Final example of Bae’s demeanor change…  Sushi By Bae is supposed to be more traditional Japanese fishes and serving styles.  Sushi By Bou is the place to go for STAPLEs.  You’re not going to get much Japanese fish, or anything exotic or rare, ever.  But their staples, BOTAN EBI, California UNI, WAGYU, and combos thereof, are fantastic.  At the end of our meal, after having purchased 3 omakases, 3 add on pieces each, 3 bottles of premium sake, we asked for a final piece of WAGYU steak raw, topped with UNI.  Her response was, that’s Bou, we’re Bae, we don’t have that.  Now come on!!!!  The steak is inches away from you, the service staff is shared, and the billing system is the same.  What the heck kind of service is that?  If it’s truly an issue, offer to start a separate tab for us for that one piece.  Clearly, that would have been much too logical.  The curt, “ain’t me” kind of response was more Bae’s style that night.  Seriously – in this day and age, how is that kind of customer service acceptable?

I feel like I’ve gone on a bit of a rampage of complaints, and it’s true, I have very little tolerance for rudeness, especially at restaurants we frequent.  In the span of 2 months, we visited Sushi By Bou and Sushi By Bae five times.  I’d call that being “regulars”, wouldn’t you?  I also consider ourselves as “great” customers.  We’re incredibly nice, incredibly polite, and we share our bottles with others.  In short, we bring the fun without the rambunctiousness.  Oh, and we tip.  I looked back at the receipt, boyfriend did 38.11% for this meal.  I’d say that’s pretty generous.  Shouldn’t our generosity be rewarded?

We typically hang around post dinner, and have more drinks with Josh, the host, and the bartender of the evening.   Tonight, we decided to drink downstairs at the Jue Lan Club instead.  Hint hint – your chef was rude!  Not very subtle, am I?  Ha!  Subtlety is not a virtue I possess.

All that said, if you don’t care about how you’re treated, and want to pay a “fair” cost for respectable, but not stellar sushi, Sushi By Bae is still a very solid option.

Bae is definitely taking more risks with her servings.  Some are tried and true traditional winners (MADAI KOBUJIME, her Tunas, her SHIMA AJI wonder), but the others fall short (HOTATE, SAYORI, IKURA bowl), or even fall flat on its face (AKAMUTSU with ginger, SABA, SAWARA).  For the cost, it’s still a good deal, but the experience is definitely “lacking”.