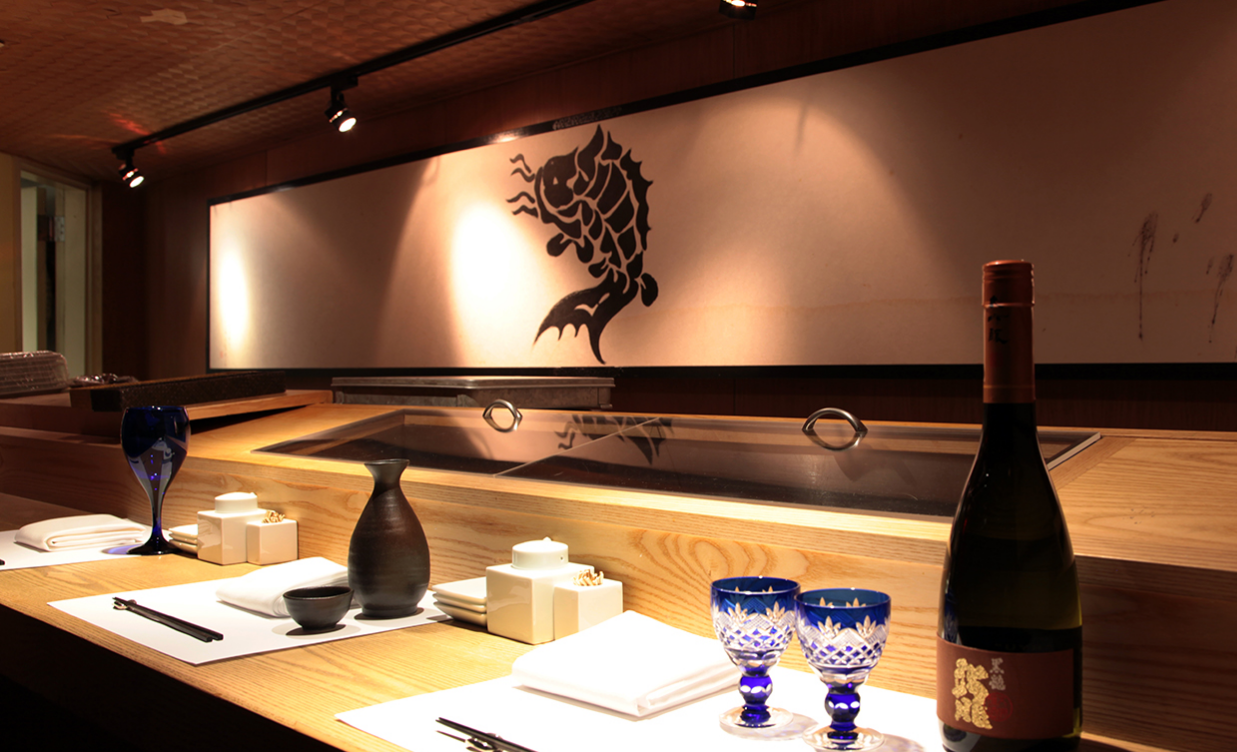 It’s been about a year since our last visit to Sushi Azabu.  On that last visit, we arrived over an hour early, and were famished, so conceded to take the only seats available at the time, table seats, giving up our reserved bar seats that were over an hour away.  That was the first and only time I ever sat at a table seat at Sushi Azabu.  Like the chef at USHIWAKAMARU once said “first time, last time”.  When you’re used to bar seats, the seats at the table can be brutal.  And for us, it was.  Sushi is meant to be consumed the moment it is served.  The rice warm, the fish cool, the seaweed crunchy.  Not batched up into a platter, to be consumed all at once, where the temperatures get all sorts of mixed up, and the seaweed soggy.  The table seats at AZABU was especially brutal.  It was a busy weekend night, we were seated 3 steps away from the bar, and saw our food put out at the bar for almost 10 minutes before it was brought over to us.  I was livid.  Bar seat or no, the omakase is still 150 bucks per person, so watching your food go “cold”, while you are “starving” is HIGHLY irritating.  What made it worse was the fact that our sake bottle was kept a little distance away, in a wine bucket.  My glass was non-stop empty.  You can tell how much we enjoyed our time, or long we stayed based on how much we drink.  We usually have 2 bottles alone, or more if the chef/wait staff joins us.  We had one bottle that night.  Not because we got out quickly, but because it was kept too far away, and I was constantly left THIRSTY.

Sorry, I really should not be focusing on what happened over a year ago.  That just was a tough night, and I needed to vent.  Plus, it’s my blog, so I can write whatever I want.  HAHA!  Just kidding…  Kind of…  Sorry, not sorry?

Tonight’s experience was night and day from our last, and brought me back to being a fan.  We came on the Friday before Labor Day, and it was empty!  Empty means super attentive staff and chef!  Our glasses were always filled, and we were having drinks with everyone!  Our chef, the other chef, the waiter, the other waiter.  It was a great time.  By the way, are you a New Yorker?  For out of towners, Labor Day weekend is an awesome weekend to visit NYC.  It’s when most of NYC goes away for their last hurrah of the Summer, before Fall hits, before their kids go back to school, stuff like that.  All the restaurants are still open, but maybe ½ full compared to normal.  Only caution is sushi-yas know this too, and as a result, don’t stock as much fish.  So come Sunday/Monday, the fish gets pretty fishy!

At Sushi Azabu, sushi bar means omakase only.  Your options tonight are:

OTOSHI (I learned today that “Starters” is called “OTOSHI”):

AZABU puts the OTOSHI on the menu as though it’s a “course”, it’s not.  It’s max 2 small teaspoons of food, and it wasn’t even good.  Don’t worry though, the meal does get better.

OTORO ABURI – Rather than the ANAGO, I lucked out with another serving of OTORO ABURI!  In my “tasting” the OTORO wasn’t ABURIed (torched), this was the same cut, just ABURIed.  I prefer it a little ABURIed, but still just too much fat. 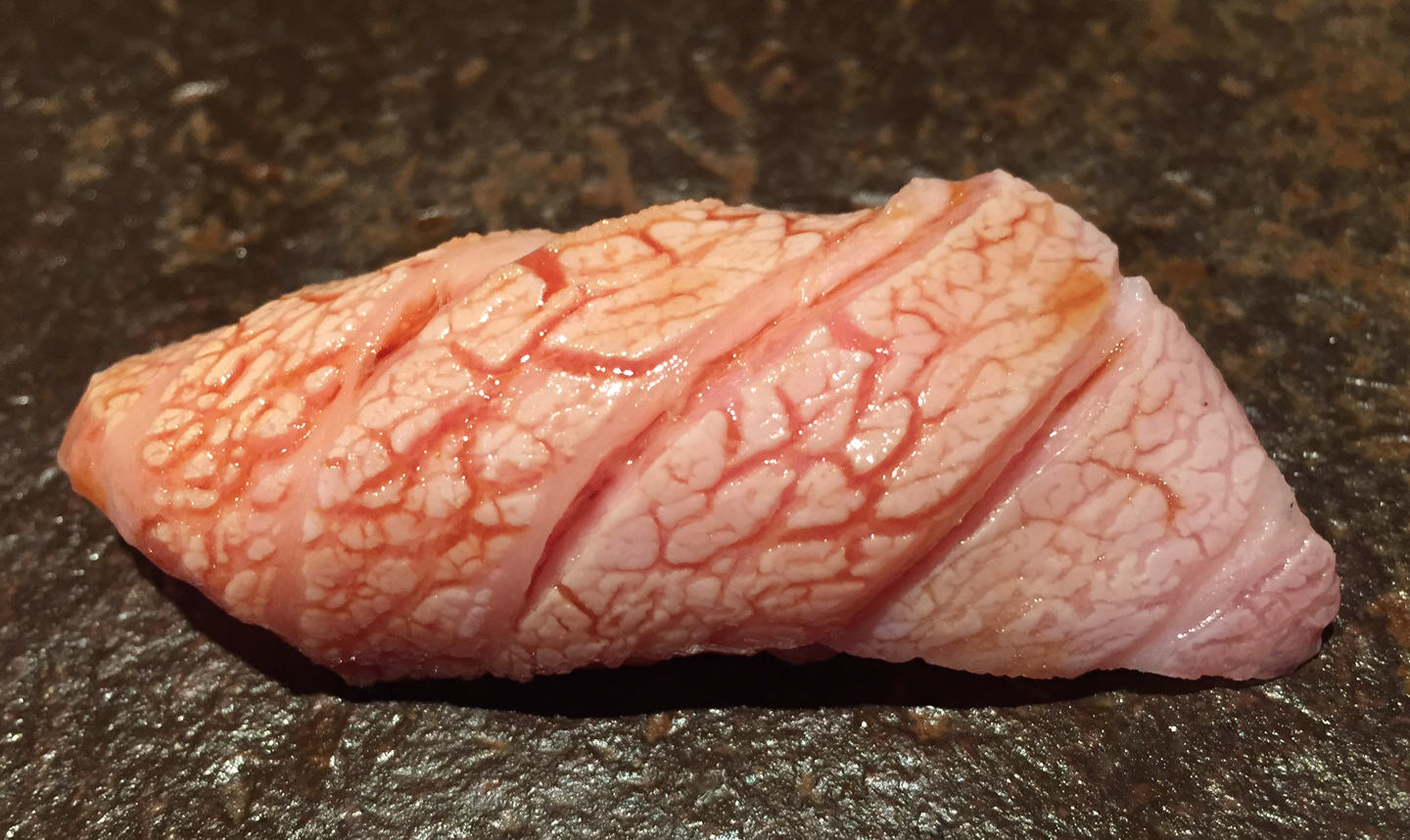 COMPLIMENTARY (we have been eating and chatting, and drinking with the chef throughout this meal, so every so often, he offered us a complimentary something, something NOT part of the omakase, not specially ordered by us):

I know I said a lot of not so fabulous things about a few of their servings, but overall, AZABU really was a very good restaurant.  It’s a dimly lit, sleek, sexy little restaurant, downstairs of the Greenwich Grill, which used to be that the only entrance by the way…  Walk through Greenwich Grill to the very back, down a flight of stairs covered by a curtain.  Today, they have their own entrance.  Tonight’s meal was really good, and the service fantastic.  Earlier, I shared how you can measure how good of a time we’ve had based on how much we drank.  We had 4 bottle and 2 carafes of sake.  On that note, AZABU is the ONLY restaurant I know that gives you a reasonable helping of sake in their carafe.  It’s like a solid half bottle.  Everyone else gives you a shifty sake carafe that’s more like 1/3 or 1/4 of a bottle.   We will definitely be visiting again soon.  AZABU gets a healthy overall rating of 28 out of 35. 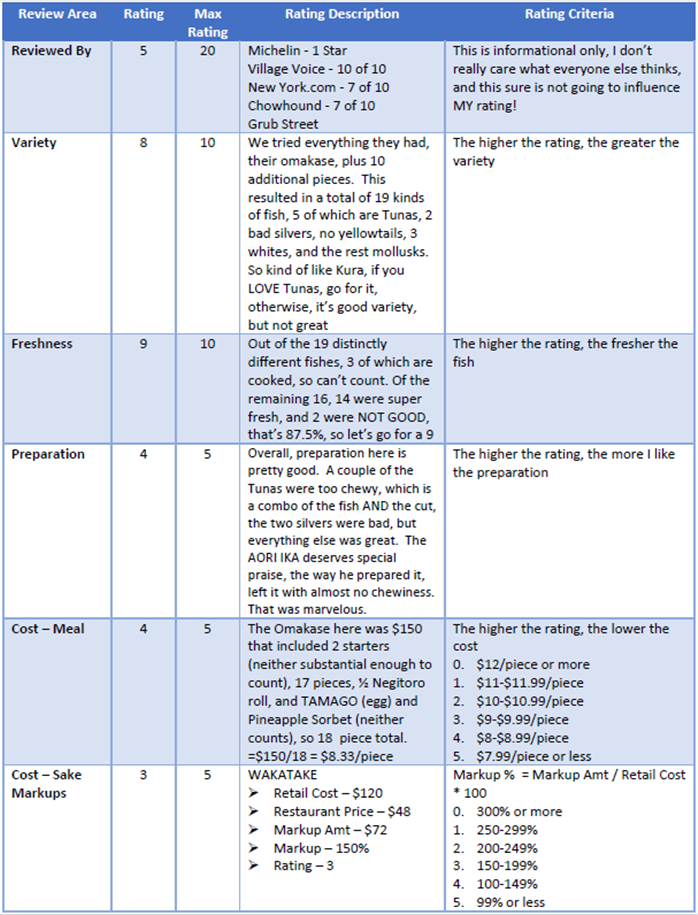