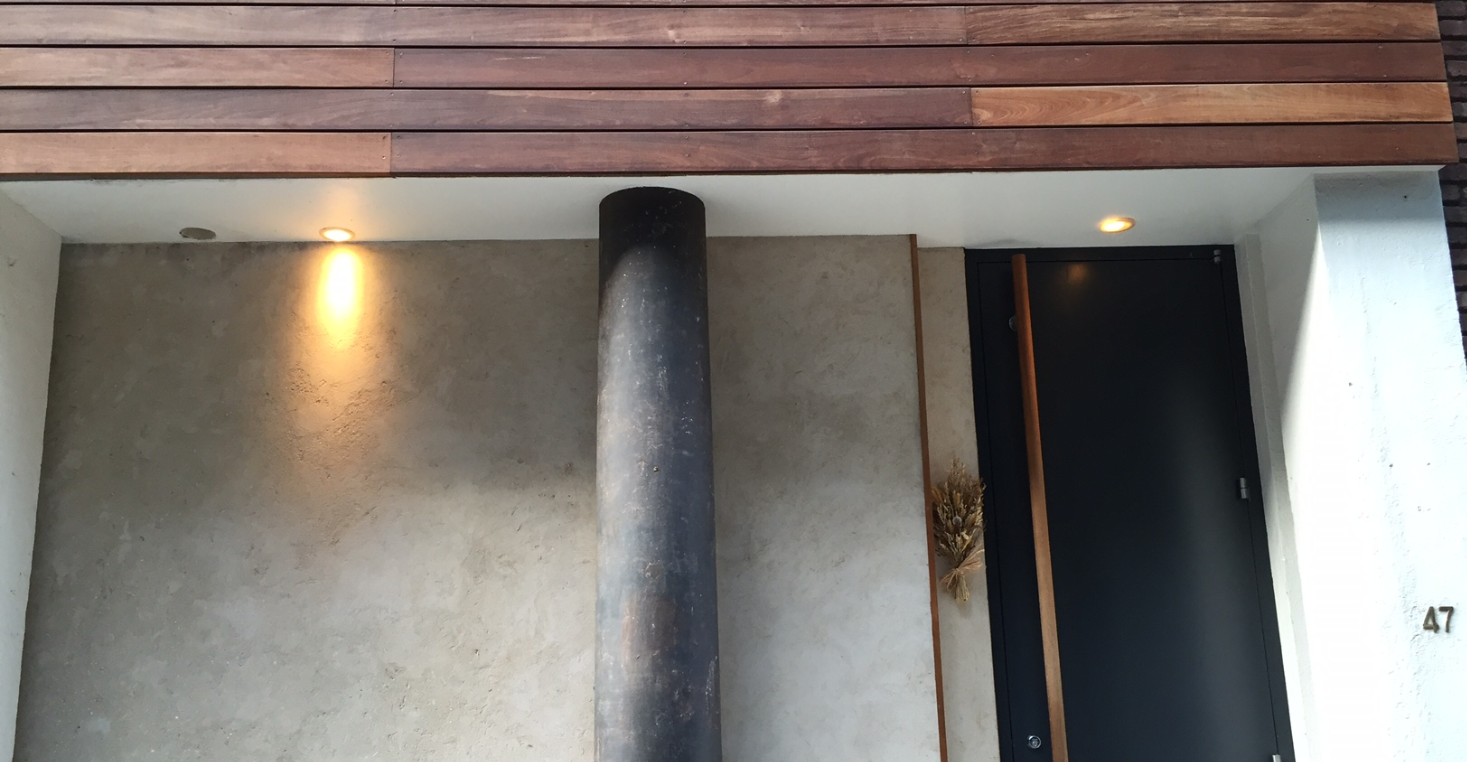 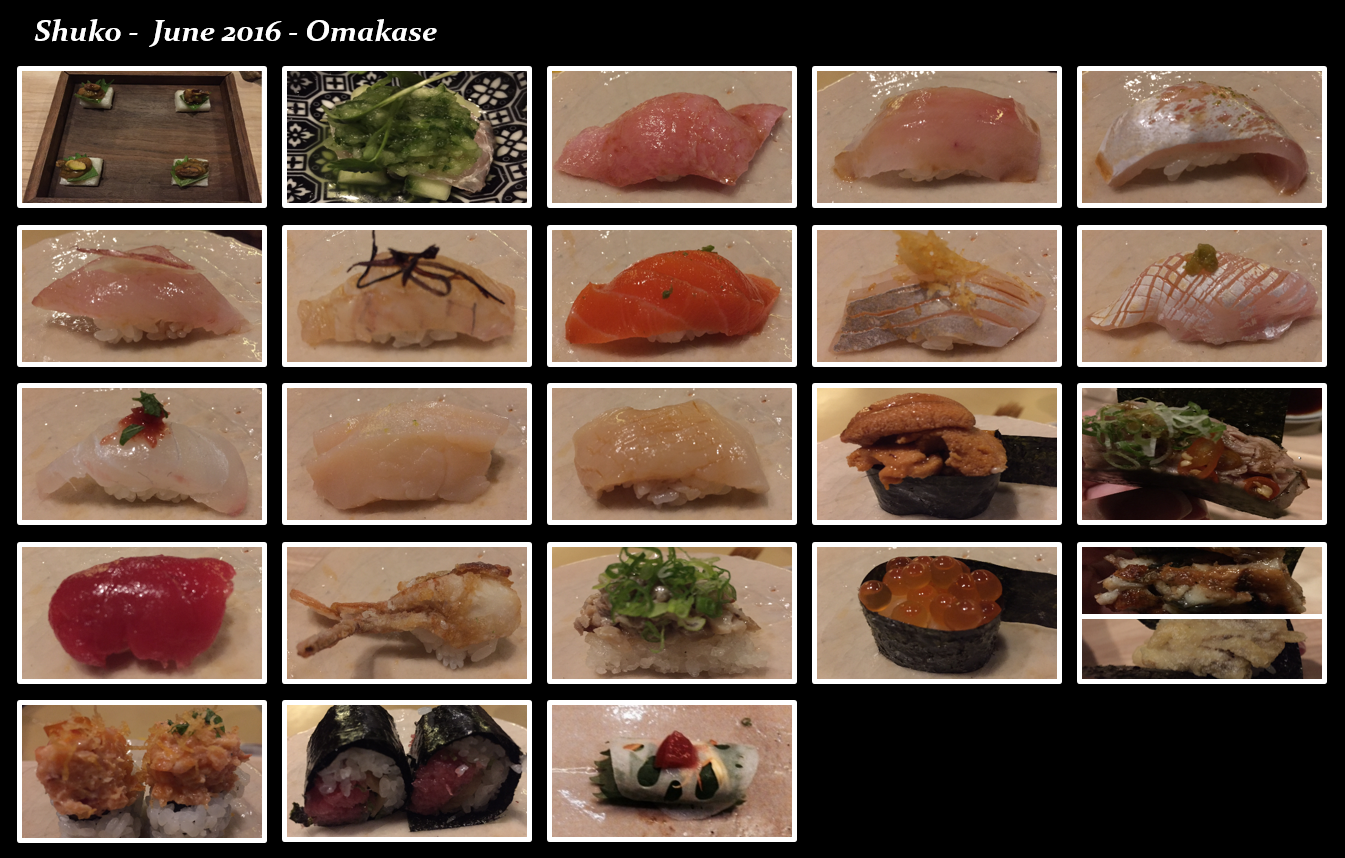 This one is hard to write.  How do I start?  Where do I start?  This was beyond disappointment.  This was my first time at this restaurant.  I like to give restaurants a minimum of two, if not three tries before writing it off, but that is going to be HARD.  I don’t know if I can do it this time.

Let’s just start from the beginning, from our entry.  I don’t know how much I’m going to be writing, but it shouldn’t be long, as the entire meal was over in 50 minutes.

We had a 6:30 reservation, which we showed up over 30 minutes early for, a few min before 6PM.  Many restaurants don’t open till right at 6, so to our happy surprise, they sat us, and immediately started waiting on us.  We asked for ice water, yes, tap, because NYC water is delicious.  Then we ordered our sake.  We were going to stick with our usual, a Dassai 23, but decided to heed to the sommelier’s recommendation of the TATENOKAWA 18, a $260 bottle, just a little bit more than the Dassai 23.  It was good, we were very happy.  Next came time for ordering the food.  The two options for our meal, is either a sushi-only-omakase for $135, or a sushi-kaiseki for $175, and then some add-ons.  Honest, when it comes to sushi, anything under $200 is fine.  We chose the sushi-only-omakase not because the cost, but because our preference is FISH, our preference is RAW FISH.  The sushi-only-omakase comes with 20 pieces of sushi, while the kaiseki version comes with only 13 piece sushi, and the rest are cooked dishes.  There were 5 options for add-ons, 4 of which were cooked, and the last was a TORO seared with a hot coal.  As you can imagine, the TORO was the only one I would have remotely considered.  I immediately saw the dismay on my waiter’s face.  What?  They’re ordering the minimum???  Yes, we are!  We typically just add to our order based our favorite pieces of the night, or what else they had to offer.

The sushi chef, NOT co-owner Jimmy Lau, but someone else, began preparing our sushi almost immediately.  I have read a number of reviews stating Shuko omakase does not start with sashimi, but does sprinkle in sashimi here and there in between sushi courses.  Well, that was NOT our experience.  We had ALL sushi, and nothing but sushi.  Chef was friendly, but English was a challenge.

I’ll talk to each piece of fish shortly, but need to continue with overall experience first.  By our second piece of fish in our sushi course, our neighbors joined us, a pair of early twenty somethings.  We like sitting at the bar because we are true sushi lovers, AND because like conversing with our neighbors, but we were NOT going to be chatty kathys with these two.  Dude, who sat immediately next to me, like no more than 8 inches away (yes, the bar area is tight!), was coughing and sneezing up a storm.  Seriously???  STAY HOME!  He was clearly on a date, so every cough, every sneeze, every time he blew his nose, he leaned & turned my way.  GROSS!!!  I started moving my plates, my water, my sake, my ginger, my EVERYTHING over, as far as possible from his projectile radius.  The wait staff clearly saw my discomfort, because trust me, I am NOT subtle, yet they did NOTHING.  They did nothing despite having the immediate two seats next to my neighbors open.  We were sitting at the short side of the bar, the side with 4 seats.  By moving them 2 seats over, he can sneeze into the open space rather than me!  Come on!!!  Move them over!  Or at least ask them to move down some, like giving us a 15-20 inch gap as opposed to 8?  More importantly, we are at a sushi bar, where the fish is actually lower than the bar.  The germs can projectile right into the fish, and you say nothing???

Struggling at the idea of ever visiting again.  I’m not a self-conscious person, but I can’t figure out if we were rushed out because the staff looked down upon us for ordering only the “minimum”, because of my crocs et all, because they were trying to turn the table over ASAP, or the less cynical, they saw my discomfort in sitting next to Mr Germ Bag, but if that was the case, why not rush him out?  Why us?  Honest, per Jiro (I dream of sushi), sushi should be served quickly and consumed immediately.  We followed suit, we ate every piece (boyfriend immediately, me, right after the photo).  In NYC however, if you are going to spend a chunk of money on a meal, we expect an “experience”.  We felt rushed like no other.  We never order less than two full bottles, and upwards to four or five bottles, as we like to share with the chef, our waiter, and even our sushi counter neighbors.  Today we had time for only one, we were still on our first bottle by the time our 17th piece arrived!  We wanted to eat more, we weren’t full, but they had NOTHING to offer us.  The stuff they did have was very hit or miss.  It’s possible that Shuko can be a good Japanese restaurant, not that I’m a good judge for that, but this is not a good sushi-ya!  And don’t lure me in with a 20 piece sushi-only omakase when you’re only going to have 14 fish to offer, especially when 2 of the 14 was bad!  Overall unfortunate rating of 18 out 35. 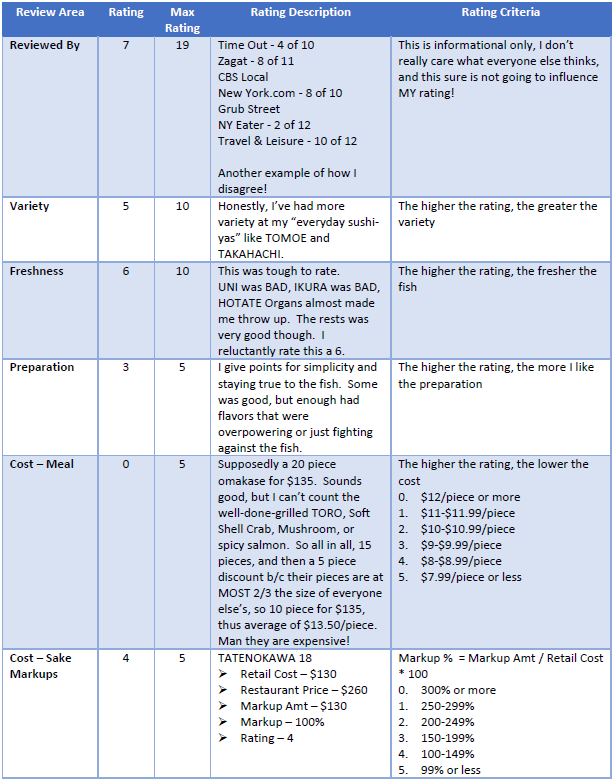