Did you know that Jewel Bako have consistently received one Michelin star, every year, for the last 11 years?  That’s pretty impressive, is it not?  While I typically don’t read much into other’s reviews/ratings/best-of-lists for sushi (sushi alone, not other cuisines), Michelin does hold a bit more weight.  If Michelin says a restaurant is deserving of a star, it really can’t be “bad”.  BUT, if Micheline doesn’t give it a star, that doesn’t mean that much to me.

Honestly, it’s been years since I’ve been to Jewel Bako.  Back then, I would go to Jewel, USHIWAKAMARU, 15 East, and sometimes, even Bond St.  Before too long, Ushi won out, where I would visit the others only as a backup, if I couldn’t secure a reservation at Ushi, or at a friend’s request.  Reason is because Jewel Bako is a very cool, swanky, romantic space, the epitome of not-me.  If my preferences were based on tonight’s meal, Jewel would be my new go-to.

Three weeks ago, I called Jewel, and scored us the two most coveted seats in the entire restaurant, the two directly in front of the head chef, Chef Shimao Ishikawa!  Jewel Bako has a good number of tables in their restaurant, but only a maximum of 7 at their sushi bar.  Of the three sushi chefs, head chef, Chef Shimao Ishikawa serves only the sushi bar, while the other two chefs serves the remainder of the restaurant, so nabbing the two seats directly in front of him is quite a treat!

Perhaps I was more fearful of conversing with the chef in the past, or perhaps I was simply less outgoing.  Actually that’s not it, I’m still not outgoing today.  Boyfriend’s the talker, me less so.  I only talk fish, I LOVE talking fish, and I LOVE when chefs are willing to converse with us, and impart some fish wisdom upon us.  Tonight, boyfriend chatted up the head chef, Chef Shimao Ishikawa, chatted about everything under the sun, chatted about where the chef is from, his background, what the chef likes, dislikes, cuisines other than sushi, everything.  Boyfriend is like the Gold Olympian of chatters.  He can talk to ANYONE!  And he’s genuinely interested too!  I’m the opposite of that, so thank goodness boyfriend is who he is, providing me the platform to sneak in tons of fish questions!

OK, let’s get on with our fabulous meal tonight!

Sashimi (from left to right):

This is one of the most well rounded omakases I’ve had!  Such a wonderful mix of equal whitefishes, silverfishes, yellowtails, tunas,  roes, and mollusks (shrimps, clams, squids, octopuses).  Everything was super fresh.  We will definitely be back again soon!  Thank you Chef Shimao Ishikawa!  Thank you for a wonderful meal, for chatting with us, and for putting up with me!  Awesome rating of 32 of 35!  WOWZERS!!!

Wait, before we sign off, one caution for those that are true TORO lovers, the TOROs we had were fatty, but not insanely so.  So if you’re looking for a ton of OTORO, this isn’t your spot. 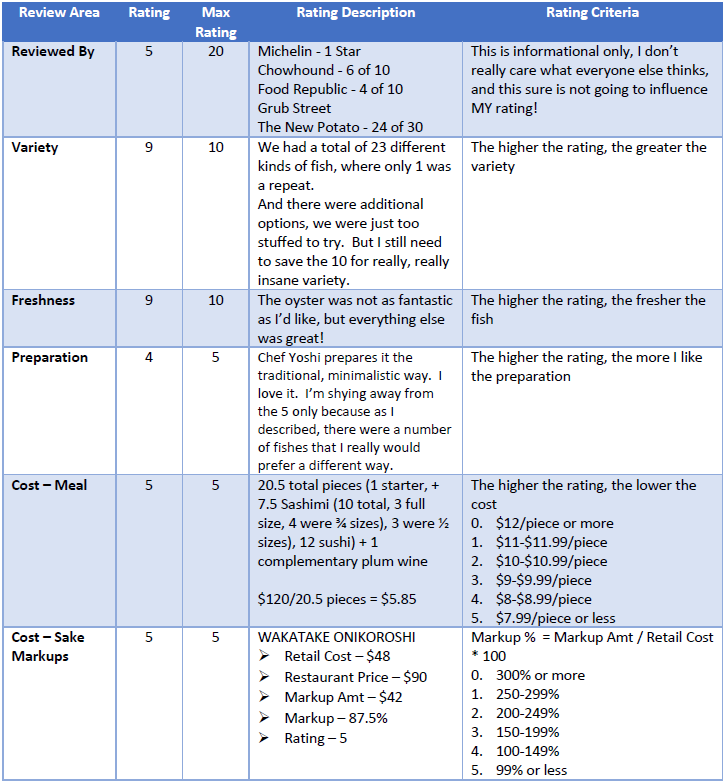