It’s past 3PM on a July 4th weekend.  Where does one go for sushi?  The options are pretty limited.  Most of the fancy sushi-yas, will wrap up their lunch seatings at 2, 2:30 latest.  Tomoe, an everyday sushi-ya, does its last seating at 2:45.  Now what?  Trusty Blue Ribbon to the rescue!  Not MY Blue Ribbon, not BLUE RIBBON IZAKAYA, but Blue Ribbon Sushi.  Blue Ribbon Sushi used to be my favorite sushi-ya, but that was a LONG time ago.  Shortly after I graduated college, I made my first visit to Sushi Yasuda, back when Naomichi Yasuda still reigned, back when there were very few high quality sushi-yas in NYC.  That was when I first learned what true omakase was.  Since then, I go to Blue Ribbon Sushi not for true omakase, but for the unpretentious, simple, impeccably fresh fish, at a great value, especially during off hours.  They are open from noon till 2AM!

That said, to stay true to being objective in my reviews, I ordered the omakase anyway.  Talk about sacrifice!  What a team player I am!  At Blue Ribbon Sushi, despite whether you sit at the bar, or not, you will be served an omakase-PLATE, as opposed to traditional omakase where they provide you the individual servings/pieces.  Not to sound high-maintenance, but this really does make a huge difference.  The attention to detail, the preparation, the dressings, they all fall short when compared to a true omakase.

To be perfectly objective, this reviewed was doomed from the start.  I go Blue Ribbon Sushi, because they have a crazy variety of super fresh fish, all at really great price points.  Today, I ordered the Omakase, knowing that I don’t love their omakases, knowing their omakase shortfalls.  But for the amount of fish you get at the crazy low price point of $85, it’s pretty unbeatable.  My complaint about the sashimi round is too heavy on the yellowtails, not enough of everything else.  My complaint abt the sushi round is the smoked yellowtail and the run of the mill “lobster roll”.  My complaint about the overall omakase was not a good enough distribution, the not so great lobster roll was my one and only shell fish.  No shrimps, squids, octopus, one or two shell clams.  See?  Not a little bit of everything like I prefer.  BUT, if you don’t mind that, go for it!  OR be like me!  You wouldn’t know it based upon this review, but I LOVE this restaurant, I just order a la carte, and all is good. 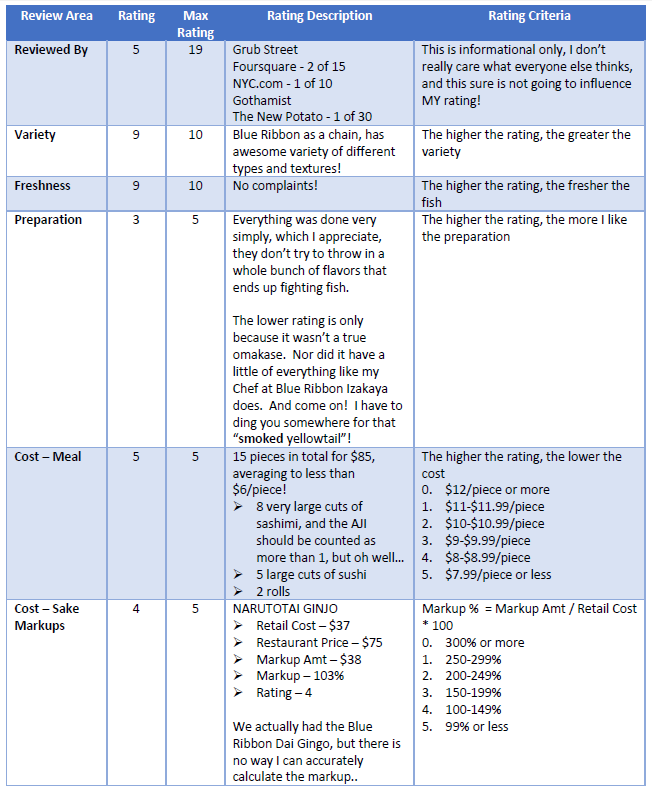